Growth in subscribers to legal streaming services led to 20.8% rise in revenue 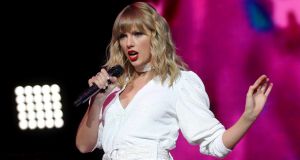 Sales of Hozier and Taylor Swift music l contributed to a 20.8 per cent increase in sales at Universal Music Ireland in 2019. Photograph: Isabel Infantes/PA Wire

Sales of Hozier and Taylor Swift music contributed to a 20.8 per cent increase in sales at the Irish arm of music giant Universal to €20 million last year.

Increased costs resulted in pretax profit at at Universal Music Ireland Ltd reducing by 34 per cent, however, from €1.6 million to €1.05 million.

Revenue increased on 2018 “primarily due to the continued positive growth in subscribers to legal music streaming services”, according to the company directors.

The directors noted that the company maintained its leading market share in the Irish music market in 2019.

The directors said the company faces risks and uncertainties, mainly as a result of the Covid-19 pandemic and its impact on consumer spending.

It last year paid out dividends of €1 million.

A breakdown of revenues show that royalty and licence fee income increased from €13.2 million to €16.7 million, with the sale of goods declining marginally from €3.35 million to €3.30 million.

The number of people employed by the business last year remained at 19, with staff costs rising from €1.6 million to €1.78 million.

Remuneration, including pension payments for the firm’s two directors Mark Crossingham and Nick Younger, increased from €564,567 to €665,988.

At the end of December last, the firm had accumulated profits of €2.39 million.