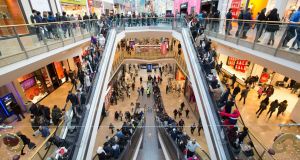 Shopping centre owner Hammerson has agreed an all-share takeover of rival Intu in a £3.4 billion deal that will create Britain’s biggest property company.

It will see the likes of Intu-owned Lakeside and the Bullring in Birmingham, controlled by Hammerson, come under one roof, creating a £21 billion shopping centre giant.

The deal by Hammerson, which part-owns the Dundrum Town Centre facility in Dublin, represents a value of about 253.9p per Intu share, equivalent to £3.4 billion.

The combined group will be led by Hammerson boss David Atkins and chaired by its current chairman, David Tyler.

Shareholders will vote on the deal next year, with Intu having already secured 50 per cent of investor support for the all-paper deal.

“This transaction will deliver real value for shareholders,” Mr Tyler said. “The financial strength of the enlarged group and its strong leadership team will make it well-placed to take advantage of higher growth opportunities on a pan-European scale.”

The groups plan to slash costs, offload at least £2 billion worth of assets and target high growth markets such as Spain and Ireland.

John Strachan, chairman of Intu, said: “A combination of both Intu and Hammerson will create a more resilient, diversified and stronger group that we believe will benefit all our stakeholders.

“Intu offers high-quality retail and leisure destinations in the UK and Spain, which when merged with Hammerson’s own top-quality assets in the UK, in France and in Ireland, present a highly attractive proposition for retailers and shoppers in Europe’s leading cities.”

The acquisition will result in Hammerson shareholders owning 55 per cent of the combined firm and Intu investors the remainder.

The deal comes at a time when consumer confidence has taken a pounding following the Brexit vote, resulting in a sharp decline in retail sales.

However, shopping centres in city locations have tended to fare better than high streets during economic downturns.

Mr Atkins added: “This marks an exciting milestone in the history of Hammerson. Bringing together the high-quality portfolios of both companies establishes Hammerson as a larger, leading European retail REIT, enhances shareholder returns and supports opportunities for long-term growth.

“The acquisition creates a leading pan-European platform of desirable retail and leisure destinations which are better-positioned to serve the needs of our retailers, excite our customers and support our partners and communities.” – PA