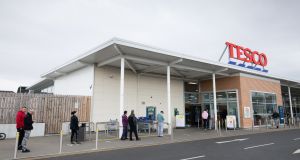 Marquees to protect queuing customers from inclement weather, traffic light signals and infra-red cameras to control the flow of entry and the ramping up of home delivery are among measures being implemented by Irish supermarkets to cope with increased demand as the State enters Lockdown 2.

When the first lockdown happened in March and business spiked a quarter while store capacity was cut, queues of customers waiting to gain entry became a common sight, snaking around the perimeters of supermarket carparks.

While the unseasonably good weather made Spring queuing bearable, many chains are now investing in measures to deal with the wintry conditions anticipated in coming weeks.

Tesco is currently trialling a marquee system to provide shelter for queuing customers at its branch in Arklow, Co Wicklow. Joe Manning, the chain’s commercial director  in Ireland, says that once the system’s safety has been confirmed, it will be rolled out to “the 23 or 24” Tesco stores where indoor queuing is not possible.

“In most of our stores, people can queue in the shelter of a mall or shopping centre, or in the general merchandise section. But there are some stores where this is just not possible. Once we test the safety of the marquee in Arklow, we expect to roll them out in the others by Halloween,” he said.

Tesco also operates an infra-red customer counting system at its stores, and the entry light turns from green to red when capacity under social distancing restrictions is reached.

At that stage, Manning says, Tesco “mans” the automatic system as it gives customers more confidence to see a staff member at the door controlling entry. Super Valu says it is also considering a traffic-light system while Lidl has already implemented one in 90 per cent of its stores.

Lidl’s chief operating officer, Robert Ryan, said the German discount chain is also considering providing queue shelters at its “higher-footfall stores”, although he stressed that its first option is to manage or eliminate queues by getting customers in and out of the stores as quickly as possible, by clearing aisles and opening more tills to prevent customer congregation.

“We are also seeing more staggered shopping patterns throughout the day,” he said, which will help to manage volumes. This, he says, is being “self policed” by people who are increasingly seeking out quieter times.

Noel Keeley, the chief executive of the Super Valu owner, the Cork wholesaling giant, Musgrave, said the group has been working with its independent retailers to “put in canopies and queuing space”. Keeley, who took the reins at the group in January from the retiring Chris Martin, said deteriorating weather was also having an impact on some customer’s buying behaviour as the State enters a second lockdown, prompting some to spend more on “comfort food”.

“A big part of that is the weather. It’s getting darker earlier. It’s more difficult for people, so they’ll want more treats, and they deserve them. So we have prepared for that,” said Keeley.

All the supermarket chains say they have ramped up stock levels to unprecedented levels, in anticipation of a fresh lockdown but also to cope with the upcoming Christmas shopping season and to alleviate any risk of shortages of certain products as a result of a possible No Deal Brexit.

Manning says Tesco has “shock proofed” its supply chain to cope with the expected surge in demand, as house-bound customers unable to socialise stock up their larders instead.

“March took us all by surprise. We weren’t prepared. But it is different now. Even over the summer we were building up our stocks. There is a cost to holding so much goods, but early on, we decided we were not going to worry about cash being tied up in stock. It was more important to shock proof,” he said.

Tesco’s network of warehouses includes the biggest building in the State, its distribution centre at Donabate in Dublin. Just four months before the pandemic arrived, Lidl also invested €100 million in a new storage and distribution facility in Newbridge, which has given it additional capacity to hold stock to cope with the increased demand in the populous greater Dublin region.

“We’ve learned a lot of lessons since the first lockdown. We have been ramping up for Christmas anyway, and volumes and stock levels are high,” Ryan said.

He joked that some customers had not learned their lessons, however: “For some reason, since the announcement of the second lockdown, toilet roll sales have been increasing again. We don’t get why.”

Keeley says Musgrave has “never carried as much stock before as we have now” for Super Valu and its other stores, including the convenience retailer, Centra. The chain has also worked with the Irish suppliers of some of its fresh goods to slim down some of its ranges, to ensure a steadier supply of the core big sellers. Tesco, too, says it has “simplified” some of its food ranges.

“We have taken out up to a third of the products in some ranges to focus on the supply of those that sell most. Manufacturing sites can work much faster with smaller ranges,” Manning said.

With all non-essential retailers closed for lockdown, including toy stores and fashion outlets, many supermarkets are expected to see increased demand for non-food items. Lidl’s Ryan says its centre aisle section, where customers can often buy anything from children’s toys to power tools, is “an essential part” of its offering and will operate as normal.

“But we won’t be pushing any products that would cause queues,” he said.

Manning says “more cautious” customers have been quietly doing some of their Christmas shopping in the run-up to lockdown, and sales of items such as toys are well up.

During lockdown, many customers won’t visit stores at all and will instead buy online for home delivery or click and collect. Keeley says Musgrave, which has had to effectively mothball the group’s foodservice division that ordinarily supplies hotels and restaurants, has diverted its delivery capacity of vans and drivers into its retail operations to cope with increased demand.

“Usage of home delivery quadrupled in the first lockdown. It was the equivalent to opening up a dozen new Super Valu stores overnight, in terms of the additional volume. It fell back over summer but that volume is coming back now,” he said.

Manning said Tesco has doubled its capacity for home delivery, and it currently has a 97 per cent take up of the slots available. It is currently recruiting for more van drivers and “pickers” to physically select and pack customers’ shopping for delivery, and also click and collect, where usage is up 60 per cent.

All of the supermarkets have also ramped up staff levels to cope with the increased demand expected for a new lockdown, and also the upcoming Christmas period. Lidl, for example, says it has recruited an extra 700 staff since the first lockdown in March to staff new stores and meet elevated demand in existing ones. It will also expand its footprint with six new store openings before the end of the year.

Tesco said in August it had by that stage recruited an extra 1,000 staff in the State since the onset of the pandemic, while Musgrave said it was also hiring extra staff for its group owned and operated stores.