Sudden disruption to trade would deliver double blow to economies 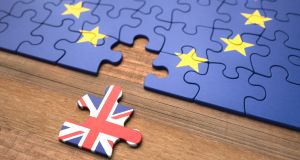 EU member states including Ireland are urging Brussels to take into account the shock of a hard Brexit in addition to the pandemic in its response to the bloc’s gravest postwar economic slump.

Diplomats from Ireland and Belgium have said in recent discussions addressing the bloc’s budget and €750 billion recovery fund that they could be doubly hit by the UK’s no-deal departure from the EU and the economic fallout from the pandemic.

Their interventions are complicating already fraught discussions over the bloc’s co-ordinated response to the devastating impact of restrictions implemented to combat the spread of the disease. The eurozone is predicted to shrink 8.7 per cent this year – a record postwar recession.

Ireland and Belgium rank among the economies that would be hard hit by a sudden disruption to trade with the UK in 2021. The prospect of a no-deal Brexit has come into view as talks between the two sides have stalled in recent weeks. The UK is due to leave the bloc on December 31st and the British government has insisted it will not seek a negotiating extension.

Since March, UK and EU negotiators have led four rounds of talks that have resulted in little progress. With six months to go until Britain’s Brexit transition period expires, there are growing concerns over a messy no-deal departure.

At an EU diplomats’ meeting last week, Belgium argued that the European Commission’s recovery fund proposals did not take sufficient account of the economic threat posed by Brexit. Ireland indicated that a Brexit shock might need to be factored into the EU’s broader debate on the recovery fund and forthcoming seven-year budget, diplomats said.

Their pleas come as member states also complain that the commission’s planned recovery fund allocates money to member states according to a backward-looking set of economic indicators, rather than reflecting the actual economic fallout from pandemic-induced lockdowns.

The Netherlands, Denmark, Austria, Belgium, Ireland, Lithuania and Hungary have all questioned Brussels’ proposed methodology on the basis that it has no direct connection to the pandemic.

Among the other questions being debated by member states are the conditions attached to the recovery fund, as well as the balance between the handout of grants versus loans. EU leaders are expected to discuss the proposals at a video conference summit next week, with the hope of settling a deal this summer.

The debate is heightened because the bulk of the recovery funding could be distributed only long after the pandemic, limiting the near-term boost. Research to be published on Wednesday from Zsolt Darvas of the Bruegel think-tank shows that three-quarters of the money will be released only from 2023 onward.

The commission estimates that 60 per cent of the money from its proposed €560 billion Recovery and Resilience Facility (RRF) – a central plank of the recovery package – will be committed to member states by the end of 2022, with actual payments taking longer to disburse. The facility requires member states to submit detailed plans for economic reform to the commission in return for the financing.

“Though well-functioning financial markets can help bridge the gap between the urgent spending needs and later EU payments, further efforts are needed to front-load EU payments,” the Bruegel note warns.

Under the commission’s current RRF allocation criteria, Italy, Spain, France and Poland are on course to be the biggest recipients of grants. Belgium and Ireland are due to receive much smaller shares of the funding.

EU finance ministers discussed the criteria for the first time on Monday. The differences highlighted “the difficulty of [reaching] a consensus between established criteria collected over years and the need to include more real-time indicators”, said Zdravko Maroc, Croatia’s finance minister, who chaired the meeting.

Some EU officials insist that aid from the RRF is not designed to reflect dynamic changes in the EU’s economic performance. Instead, the fund is intended to address structural weaknesses caused by coronavirus in the EU’s most exposed economies. The commission intends that a separate, smaller facility worth €50 billion, called ReactEU, will use more current economic indicators.

The commission defended the RRF distribution criteria, arguing that pre-crisis economic indicators are a strong guide to the “resilience” of countries going into the pandemic.

“All economies will suffer a massive fall in GDP, but, for some of them, it will be only shortlived; other economies will be much more deeply affected and will take time to recover,” the commission said in a statement. “The aim of the [RRF] is therefore to foster this resilience, reduce the economic divergences between member states and thereby facilitate the recovery.” – Copyright The Financial Times Limited 2020

1 ‘Saudi Arabia is where the opportunities will happen in future’
2 Ireland property rush risks repeat of crisis
3 Scars from the crash give Irish banks 2.6 billion reasons for Covid caution
4 MSD buys Takeda biologics plant in Dunboyne
5 Nine Goodman companies made largely untaxed profit of €170m
6 Identigen founders make €12m each from sale of company
7 What will the office market look like after the great remote working experiment?
8 Eight places that will pay you to move there
9 State’s biggest landlord records 30% rise in rental income
10 How to . . . move (almost) everything to your new phone
Real news has value SUBSCRIBE