Results for last year predate pandemic, which is expected to have hit sales 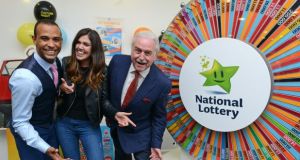 Marty Whelan and two members of the public when the National Lottery made its props available for Culture Night. Photograph: Dave Meehan

National Lottery sales jumped to a record €884 million last year as the gaming franchise benefited from a pick-up in retail sales generally and as more players registered to play online.

The business, which is run by Canadian-owned operator Premier Lotteries Ireland (PLI), said revenue from ticket and scratch card sales rose by nearly €80 million in 2019 and that this had generated €251.6 million for good causes.

The results, however, predate the onset of coronavirus, which is expected to have hit sales.

PLI chief executive Andrew Algeo said sales fell in line with footfall at the start of the crisis but have since recovered to pre-Covid-19 levels and that he expected a single-digit decline for 2020 as a whole.

“We’re now trading as well as we were pre-Covid,” he said.“Fundamentally the National Lottery has been incredibly resilient, helped by the fact that we have a strong retail network and more customers playing online,” Mr Algeo said.

In March the National Lottery cancelled the remaining seven Winning Streak TV game shows as it was deemed unsafe to have players and audience members travel and congregate to play out the games amid the coronavirus pandemic. It also removed Winning Streak tickets from sale from March 28th.

The latest results show the company generated an operating profit of €8.9 million for 2019, up from €5.1 million a year earlier, reflecting the increase in headline sales.

PLI said on average 1.39 million people or 39 per cent of the adult population now played National Lottery games on a weekly basis.

The strong performance was driven by another big pick-up in online sales, which rose by 31 per cent to €80.7 million and now account for about 9 per cent of overall sales.

The group’s online portal was revamped as part of the 2014 privatisation process, which saw the business sold to Canadian pension fund Ontario Teachers’ Pension Plan.

Previously the business was restricted from advertising its online channel, and players wishing to play via the internet were subject to a cumbersome registration process.

“We are following a long-term strategy to shine a light on the enormous impact our players have on good causes up and down the country when they buy a ticket; and to renew the National Lottery experience and its operations,” Mr Algeo said.

“In 2019, €50.8 million was paid in commission to retailers who in turn provide employment to thousands of people all over Ireland,” he added.