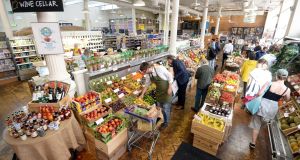 Food hall, wine bar and restaurant group Fallon & Byrne has secured planning permission for a big extension at its flagship store in Dublin.

An Bord Pleanála gave the go-ahead for construction across three floors at the company’s Exchequer Street site one month ahead of schedule.

The plan includes a new outdoor terrace on the second floor. Consultants for Fallon & Byrne told Dublin City Council that the business required increased space to further develop and prosper.

The plan had stalled after the owner of the adjoining block, Burlington Real Estate Ltd, lodged an appeal against the Dublin City Council decision giving the project permission last September.

In its appeal, Burlington Real Estate Ltd raised concerns about the impact of the Fallon & Byrne proposal on the adjacent office building in terms of overlooking, noise and disturbance.

The owner of Central Hotel Chambers office building had, meanwhile, proposed measures to ensure its building would not be adversely affected by the extension.

These included awning to be installed on and over the west side of the first-floor terrace in order to protect the privacy of the Central Hotel Chambers office building.

The issue has now been resolved amicably, with a letter on behalf of Fallon & Byrne to the appeals board stating that it supported the awning proposal.

The letter states Fallon & Byrne are willing to undertake and carry out the works set out in the grounds of appeal. It also states that the retail company has no issue with the objection letter and requests that the matter be dealt with as swiftly as possible.

The appeal was lodged on October 17th last and the board has now ruled that the Fallon & Byrne proposal would not seriously injure the amenities of the area or of property in the vicinity, would not be prejudicial to public health and would generally be acceptable in terms of traffic safety and convenience.

The board has included the two specified conditions agreed by the company and the appellants in the permission.

1 Hugo MacNeill steps back from Goldman Sachs role
2 North’s consumers will be ‘hardest hit’ if UK fails to secure EU deal
3 Irish economy to grow by 3.4% this year, predicts EY
4 Irish company paid €1.2m a year by collapsed Blumenthal-linked Australian restaurant
5 Will disabled brothers be homeless when Fair Deal loan falls due?
6 ‘Germans are very efficient and reliable. Cancelling is alien to them’
7 Sir Anthony O’Reilly declared bankrupt by court in Bahamas
8 Should AIB compensate me for upsetting letter on arrears?
9 Dating apps move past their shaky start
10 Why bosses should not be afraid of speaking out on Instagram
Real news has value SUBSCRIBE