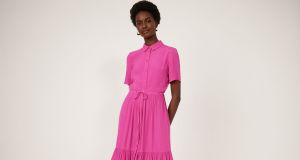 Warehouse, the retail brand that is part of the Aurora fashion group that used to include Karen Millen, has bemoaned the “difficult retail environment” in the Republic after it failed to make a profit here last year.

Warehouse Fashion Ireland, which operates the UK-based brand in Ireland, reported sales for the year to the end of last March of €6.5 million, according to accounts just filed. This was marginally ahead of the previous year, although it also included an extra week’s trading, skewing the figures slightly.

The group, which now lists only five locations in Dublin, broke even on its Irish sales. Its directors warned of dangers in the retail landscape, such as the difficulties that have afflicted House of Fraser. Warehouse has a concession at House of Fraser in Dundrum, as well as in Arnotts on Henry Street, Debenhams in the Ilac Centre, and standalone stores in Blanchardstown and off Grafton Street.

The company was one of three Aurora-linked fashion businesses that entered examinership in 2014, alongside Karen Millen and Coast in Ireland. All three emerged from the restructuring and eventually ended up in the ownership of Icelandic bank, Kaupthing.

The past difficulties of Warehouse are still evident in its balance sheet, where its latest returns show it carries accumulated losses of €41.3 million, which have been plugged with shareholder equity calls.

Karen Millen and Coast were since put into liquidation in 2018, while a slimmed down Warehouse survived and continues to trade.

Kaupthing also owns another Aurora-linked fashion business, Oasis, which still trades in Ireland and was never in examinership or liquidation. It reported sales in Ireland last year of €16.4 million, down from €18 million.