Cantillon: Bookseller has survived world wars, uprisings and various recessions, but Covid could be its biggest challenge yet 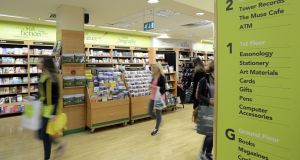 Footfall remains low in Eason shops, although its ecommerce sales have blossomed in the pandemic. Photograph: Dave Meehan

Eason shareholders will get the chance to vote next month on a proposal to distribute €20 million between them from the proceeds of property sales over the past two years.

The motion requires 75 per cent approval but should sail through, especially given the current economic climate. The disappointment for the 230 people who own the Irish bookseller is that the company didn’t manage to get away the sale of the remaining three properties – at O’Connell Street in Dublin, Blanchardstown and Athlone – due to the impact of Covid-19 on the economy.

Eason had expected to net €40 million from the sale of these stores, with the bulk presumably coming from the disposal of its flagship store on O’Connell Street. The plan is still to sell them, but chairman David Dilger has told shareholders this is unlikely before 2022.

This is all part of a wider restructuring of Ireland’s oldest bookseller, which saw the retail arm spun off into a separate legal entity last year with €19.4 million in capital from the sale of the properties to give it a strong funding position. It will need every cent of that money to navigate the coming years successfully.

The retail division previously operated from the various shops rent free but now pays commercial rents to new landlords, and to its own shareholders in the case of O’Connell Street, Blanchardstown and Athlone. Some of these deals might no longer be viable in a post-Covid world.

Eason has already decided not to reopen its seven shops in Northern Ireland, and 150 positions have been made redundant in the Republic. Footfall remains low in key locations although its ecommerce sales have blossomed in the pandemic.

Eason prides itself on being independent and Irish owned, and of having survived world wars, uprisings and various recessions. Given the challenges posed by the current global pandemic, the next chapter of its history could well be a defining one for the business.