Supermarket giant reports growth of 1.1 per cent in Irish sales and 2.1% in UK sales 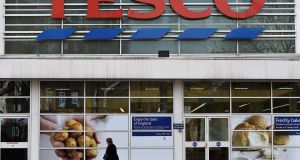 Supermarket giant Tesco has reported a surge in half-year profits and rising sales as it hailed efforts to keep prices low amid Brexit-fuelled inflation.

The group said UK and Ireland underlying operating profits leapt 21.1 per cent higher to £471 million (€531 million) in its first half after it notched up its seventh quarter in a row of rising sales.

In the Republic, Tesco said like-for-like sales grew by 1.1 per cent, improving steadily throughout the half – with 2 per cent growth in the second quarter – as customers responded well to its continued price investment. Irish turnover for the period was €1.23 billion.

“Volume growth of 3.6 per cent has been very strong, particularly in fresh food where volumes were up 5 per cent,” it added.

UK like-for-like sales in the second quarter lifted 2.1 per cent, although this was down slightly on the 2.3 per cent recorded in the previous three months. Chief executive Dave Lewis said the group was now “more competitive and more customers are shopping at Tesco” as it sought to keep prices low.

He added: “We are continuing to make strong progress. Sales are up, profits are up, cash generation continues to strengthen and net debt levels are less than half what they were when we started our turnaround three years ago.”

“Today’s announcement that we are resuming our dividend reflects our confidence that we can build on our strong performance to date and in doing so, create long-term, sustainable value for all of our stakeholders,” the chief executive said.