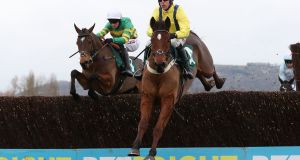 Betbright, which is headquartered in Dublin but regulated in the UK, offers online sports and casino betting to its customers.

London-listed 888 confirmed yesterday that it is buying Betbright for £15 million, and plans to integrate the Irish-based business into its overall operation.

He is understood to have invested around £7 million in the company in early 2016 shortly before taking the executive chairman’s post. Mr Ricci is a racing enthusiast and has a string of high-profile national hunt horses in training with Irish handler Willie Mullins. His horses, Faugheen and Annie Power, won the prestigious Cheltenham Champion Hurdle in 2015 and 2016 respectively.

A number of runners will carry his distinctive pink and green silks at the Cheltenham Festival next week.

Betbright is owned by Dublin-registered Dedsert (Ireland) Ltd, which in turn is owned by a British Virgin Islands company Dedsert Ltd.

Dedsert’s directors include Dublin twins Richard and Marcus Brennan and Tadgh O’Toole, who all have a background in telecoms. The most recent accounts available for Dedsert Ireland show that it was more than €18 million in the red at the end of 2017. The company owed creditors almost €22 million while it had €3.6 million in assets. Its liabilities included almost €14.8 million due to related companies Modeva and Kelfast.

Itai Pazner, chief executive of 888, said: “This acquisition of a high-quality and scalable sportsbook is an exciting milestone for 888. It gives the group the missing piece in our proprietary product and technology portfolio and will enable 888 to own proprietary, end-to-end solutions across the four major online gaming verticals.”

Mr Pazner said he was confident that the acquisition would increase the group’s long-term prospects and differentiation in the growing global sports betting market.

“Our new colleagues joining from BetBright will significantly strengthen 888’s sports betting expertise and industry know-how, and we are delighted to welcome them into the group,” he said.

The Betbright deal is the third acquisition 888 has made in recent months and the company said it is part of its strategy to be “a global leader in the online gaming market by driving organic growth across regulated markets, supported by value-accretive M&A”.

Gibraltar-based 888 is listed on the London Stock Exchange and owns several gambling brands and websites, including 888casino and 888poker.

It has an extensive deal with Cheltenham that includes backing a high-profile race on New Year’s Day and sponsoring the Prestbury Cup, awarded to either Ireland or Britain for training the most winners at the March National Hunt Festival.