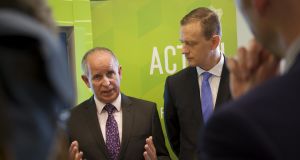 The Irish arm of the global firm recorded a 14 per cent increase in revenue to €285 million last year, pushing it into second spot behind KPMG in the rankings here.

All three of its main business areas – accounting, tax and consulting – experienced double-digit growth on the back of what the company described as a big upswing in business activity.

The firm’s largest business unit, consulting and advisory, generated a turnover of €133 million, which was 14 per cent up on last year.

Deloitte managing partner Brendan Jennings said revenue in this area was driven by demand from companies for advice on how best to adopt and leverage new technologies. A pick-up in mergers and acquisitions activity in the Irish market was also driving demand for consultancy services, he said.

Changes to the global tax environment arising from the OECD’s Beps (base erosion and profit-shifting) had generated greater demand for its tax advisory services, Mr Jennings said, with revenue from this unit increasing 15 per cent to €51 million.

“Businesses are trying to make sure that their tax structures are aligned to their business model in this new evolving tax area,” he explained.

Deloitte’s core accounting business, meanwhile, generated revenues of €100.5 million, up 13 per cent on the previous period, a shift Mr Jennings put down to winning new business, which had increased the firm’s market share in the Republic.

The assurance side of this unit had also seen a pick-up in demand from firms concerned about the risk of cyber attack.

Mr Jennings said Brexit has had little impact on the business so far, although the company had done some work for financial firms looking to invest in Ireland after the UK exits. “But that’s at an early stage and the revenues are really not that significant,” he said.

The firm had not seen any softening of activity from Irish businesses exporting into the UK either. “So we haven’t see a big positive on it and we haven’t seen a negative on it either – at the moment it’s relatively flat.”

Mr Jennings said he expected to see Brexit-related business pick-up as the UK moves closer to its departure date and more businesses decide to move into the Irish market.

He said there was a clear category of companies that were not waiting around for the shape of Brexit to emerge and this was particularly true of big outfits in the food industry.

On those firms that were holding out for a clearer picture to emerge, Mr Jennings said: “I don’t think it’s a strategy, waiting to see what happens is not a good place to be.”

On US tax reform, there had been a slowdown in activity earlier this year on foot of some of president Donald Trump’s announcements, he said, but most companies were still adopting a wait-and-see approach.