Security group G4S turnaround on track as profit up 7.6% 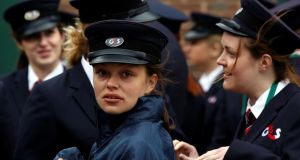 Security staff hired by multinational firm G4S are briefed a day before the start of the Wimbledon Tennis Championships. Photograph: Chris Helgren/Reuters

G4S, the world’s largest security group, said its turnaround was on track as it posted a 7.6 per cent rise in first-half profit on Wednesday and forecast better contract potential.

The company said it was confident that full-year revenue growth would be in line with a medium-term aim of 4-6 per cent and saw further expansion in 2018.

For the past four years, G4S, which provides services such as guarding, aviation screening and mobile patrols, has been selling businesses to pay off debt and trying to limit losses from British government contracts, gradually getting a greater share of its revenue from abroad.

Revenue for the six months to the end of June rose 6 per cent to £3.7 billion and earnings after tax reached £128 million.

Net debt to earnings before interest, taxes, depreciation and amortisation stood at 2.7 times, setting it up to reach its target of 2.5 times or lower by the year end.