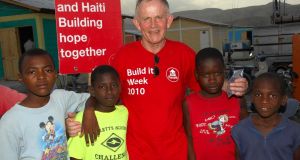 Leslie Buckley, the chairman of Haven Community Foundation, in Haiti.

This represented a decline of 6 per cent on the previous year. The most significant expenditure reduction in the period was a decline of more than €600,000 in relation to housing and infrastructure support.

However, Haven increased funding to its agricultural, livelihoods and volunteer programmes.

Haven reported an 88 per cent increase in overall income on the back of increased fundraising activity in response to Hurricane Matthew, which hit Haiti in late 2016.

Accounts recently filed with the Companies Registration Office show that Mr Buckley donated more than €67,700 to the charity last year, a drop of almost 31 per cent on the previous period.

Another donor company for which Mr Buckley is a board member was Independent News and Media, which gave €12,100 to the charity in 2016.

A significant help to Haven last year was the merger with the Soul of Haiti Foundation, which was set up in 2007 by a number of Irish entrepreneurs. A donation of €213,000 reflected a transfer of projects from the foundation to Haven in the early part of last year.

From its Dublin base, Haven employed an average of eight employees throughout the year at a cost of just under €252,000.

Haven Community Foundation was founded by Mr Buckley and his wife Carmel in 2008. Two years later, it began providing emergency relief focusing on sanitation and shelter in camps after an earthquake devastated the country.

1 Columbia Sportswear defies gloom with first Irish standalone shop
2 Restaurants file court actions against insurers over lockdown losses
3 ‘The rental situation stops me moving back home’
4 Why are markets booming when a crash is on the way?
5 How to further divide the economy using the wage subsidy
6 Second Covid-19 outbreak and no-deal Brexit an appalling vista
7 Could your old car be giving away all your secrets to its new owner?
8 VAT cuts are for businesses – consumers will still pay the same
9 Red tape logjam creates fear for Irish timber supply
10 Former Worldspreads chief Conor Foley faces €730,000 fine
Real news has value SUBSCRIBE