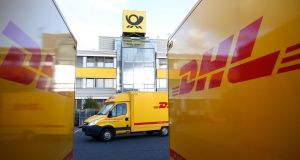 DHL Express Ireland has recorded its sixth consecutive year of profit driven by a continued improvement in international air express volumes and revenue.

Newly-filed accounts show the firm’s turnover increased 4.9 per cent to €88.5 million for the period despite a “continued increase in business-to-customer deliveries into Ireland,” which, the company says, have impacted on the group’s cost position in 2016.

However, the directors’ report notes that improvements in productivity and efficiency have offset the cost impact.

The company, whose income derives from express parcels, goods, courier and logistics services, initiated a strategy during the height of the downturn to move away from domestic deliveries and to refocus on its core international air and road express business. The plan, which involved the closure of five service centres and 300 redundancies, enabled the company to turnaround from losses of €23 million in 2009.

As the company, whose ultimate parent company is Deutsche Post, has continuously recorded growth it downplays risks to the business. It suggests it is able to withstand any competition in the market, can cope with business interruptions, is not heavily exposed to exchange rate fluctuations, and it on top of its IT systems.

Staff costs for the company increased in 2016 by just over 1 per cent to €18.4 million, with wages and salaries making up the bulk of that cost at €15.1 million. The delivery company employed an average of 335 staff per month in the period, down by two staff members on the previous year.

“The business strategy for 2017 remains unchanged, which is to continue to focus on the core international air and road express market,” the directors wrote in their statement.

1 Donohoe’s new role, House of Ireland shuts, and being indispensable at work
2 ‘Sad day’ for House of Ireland as tourism retailer goes out of business
3 ‘My rent here is so low it’s a joke’
4 Paschal Donohoe’s election as Eurogroup president ‘a great win for Ireland’, says Taoiseach
5 The €1 billion market: retailers who serve tourists face double trouble in a pandemic
6 Caveat: The tourism sector deserves to be taken more seriously in this crisis
7 Donohoe’s new role puts State at centre of debate over EU’s future
8 Gardaí raid Irish office of failed German payments group Wirecard
9 Ryanair accuses ‘screen scrapers’ of blocking refunds
10 Remote working: How to get ahead in a changed world
Real news has value SUBSCRIBE