Debenhams to shut all stores in Republic with loss of 2,000 jobs 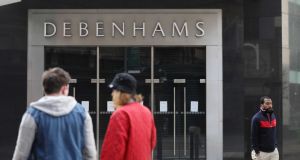 Debenhams on Henry Street in Dublin on Thursday. The retail chain has announced that it is permanently closing all its stores in the Republic. Photograph: Leah Farrell/RollingNews.ie

Coronavirus is poised to claim around 2,000 jobs with the closure of department store chain Debenhams’ shops in the Republic.

The fashion and household goods seller said on Thursday that it would place its business in the Republic in liquidation after Covid-19 had worsened the difficulties faced by its stores.

Around 1,000 Debenhams staff and 1,000 workers in concessions in the chain’s stores, who are already on temporary lay-off, will lose their jobs as a result.

The news sparked fears that others may follow as restrictions have forced non-essential retailers to shut in a bid to halt the spread of coronavirus.

John Douglas, general secretary of shop workers’ union, Mandate, warned that the Government may have to act to “jump start” retailing, which employs 200,000 people overall , following the crisis.

“In non-food retailing alone you’re talking about thousands of jobs,” he said. “They’re important in terms of the economy and for State revenues.”

Mr Douglas stressed that any State intervention should be directed at protecting workers and their living standards.

While a liquidator may keep some Debenhams stores open for a short period, the chain’s move will mean the permanent closure of its 11 shops in Cork, Dublin, Galway, Limerick, Tralee and Waterford.

The group, which suspended trading here in the face of the pandemic, told staff in a letter on Thursday that “these stores are not expected to reopen”.

Its four shops in Northern Ireland are going into administration along with the rest of the business in the UK, meaning there is a prospect that they and their 700 jobs can be rescued.

A group statement said that administrators appointed to save the UK business would appoint a liquidator to Debenhams Retail (Ireland) Ltd, the holding company for its operations in the Republic.

Debenhams appointed Geoff Rowley and Alastair Massey of FRP Advisory as administrators on Thursday to protect the UK business from legal action that could result in its liquidation.

Stefaan Vansteenkiste, Debenhams chief executive, argued that the British group had no option in the current environment but to close its stores in the Republic.

“This decision has not been taken lightly and is no way a reflection on our Irish colleagues, whose professionalism and commitment to serving our customers has never been in question,” he said.

Mr Douglas confirmed that Mandate was in close contact with the company and would seek a meeting with the liquidator once they are appointed.

The Department of Employment Affairs and Social Protection pays workers’ redundancy and minimum notice entitlements when companies are unable to do so.

Debenhams Retail Ireland sought court protection from creditors four years ago to allow it negotiate a rescue plan for the business that involved landlords cutting rents on key stores.

The company’s outlets are closed to comply with Covid-19 restrictions. It placed workers on temporary lay-off under the Government’s payment support scheme.