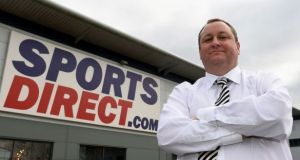 The billionaire boss of retailer Sports Direct said he was “deeply apologetic” over the way his company handled the coronavirus emergency and wants to make amends by offering resources to the National Health Service (NHS).

After Britain announced on Monday it was going on lockdown the following day requiring all non-essential shops to close, Sports Direct, part of Frasers Group, said its stores should stay open, arguing that sports equipment was essential.

“I am deeply apologetic about the misunderstandings of the last few days,” he said.

He said the retailer’s intentions were only to seek clarity from the government as to whether Sports Direct should keep some of its stores open and insisted it would never have acted against government advice.

“In hindsight, our emails to the government were ill-judged and poorly timed, when they clearly had much greater pressures than ours to deal with. On top of this, our communications to our employees and the public on this was poor,” Mr Ashley said.

He said he has offered the group’s support to the NHS.

“We are poised and ready for when that offer is accepted, with our entire fleet of lorries at their disposal - to help deliver medical equipment and supplies. This offer is not limited to the NHS but all key workforces across the government. We will help wherever possible.”

1 If tourists are such pariahs should we not be testing them on arrival?
2 ‘My rent here is so low it’s a joke’
3 Ten of the most mysterious aircraft disappearances
4 Irish man Colm Kelleher to step down from Morgan Stanley
5 EU court to rule on the Apple state aid case
6 Indoor vertical farming is the future says Irish agritech start-up
7 NordicTrack S22i Studio Cycle: An expensive way to cut down on the cabin fever
8 The property developers who survived the crash
9 Over 2,000 march in Athenry in support of Apple data centre
10 Remote working: How to get ahead in a changed world
Real news has value SUBSCRIBE