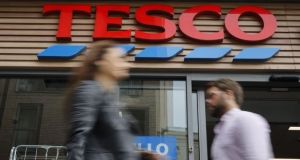 Banks agreed earlier this month to increase the limit on contactless payments to €50 as a means to reduce handling of cash during the Covid-19 crisis.

Tesco Ireland has said it is unable to increase contactless payment transaction limits from €30 to €50 by Wednesday as originally intended.

The supermarket chain said it needs to manually update software on over 4,600 individual payment devices in its network of 151 stores before being able to offer the increase.

Banks agreed earlier this month to up the limit on contactless payments to €50 as a way to reduce the handling of cash during the coronavirus crisis. The increase is expected to begin on April 1st.

“The risk associated with making such a large volume of software updates is very significant, including the potential for disruption to tills, pin pads and self-scan checkouts,” said a spokeswoman for the company.

Tesco said it did not know at this point when it might be able to update the software but would ensure antibacterial wipes are available at pin terminals for customers who wish to use card payments for amounts over €30.

It is believed the move should not impact too many customers given that most buy goods that either amount to less than €30 or more than €50.

Tesco, the Republic’s second largest grocery retailer, has taken on an additional 700 employees in recent weeks due to increased demand during the Covid-19 outbreak.