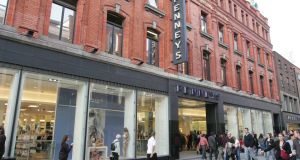 Associated British Foods, which owns the Penneys and Primark chains of retailers, issued an update on Monday.

The owner of Penneys has closed all 376 stores in 12 countries until further notice, which will represent a loss of £650 million (€705 million) in net sales per month, the company has said.

Associated British Foods, which owns the Penneys and Primark chains of retailers, issued an update on trading in its stores on Monday. It was the second such trading update in the space of a week.

Last Monday, it said it had been forced to close 74 Primark stores in continental Europe due to government measures to combat coronavirus, while also reporting that sales had fallen in those still open.

The group said it closed 20 per cent of Primark’s selling space in continental Europe which the World Health Organisation says is now the epicentre of the coronavirus outbreak.

Since then, and following the closure on Sunday of all stores in the UK which represented 41 per cent of sales, all 376 stores in 12 countries are now closed until further notice.

“A variety of work streams have been established to mitigate the effect of the contribution lost from these sales and all expenditure is being reviewed,” said AB Foods.

“In the first instance we have implemented a significant reduction in discretionary spend.

“We are making good progress in also reducing fixed costs following discussions with counterparties, in particular landlords, and welcome the recently announced government support in the countries in which our stores operate.

“As a result, we currently estimate being able to recover some 50 percent of total operating costs.

“To manage Primark stock we have also regrettably informed suppliers that we will stop placing new orders.”

The group has a strong balance sheet, substantial cash liquidity with some £800 million of net cash at the half year, together with a revolving credit facility of £1.1 billion. Therefore, total available liquidity is £1.9 billion.

“Importantly, we reiterate that in aggregate, we have not seen a material impact in our sugar, grocery, ingredients and agriculture businesses,” it added.