Era of growth at all costs ‘is over’, said chief executive of ride-hailing business 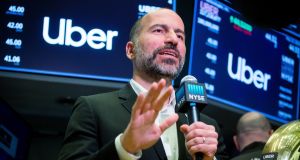 Uber capped a difficult 2019 by posting faster growth in its ride-hailing business, even as it lost more money.

On Thursday, Uber said its revenue in the fourth quarter of 2019 increased 37 per cent to $4 billion from a year ago, faster than the 30 per cent growth it recorded in the previous quarter.

The company lost $1.1 billion, more than the $887 million it lost a year earlier.

“We recognize that the era of growth at all costs is over,” said Dara Khosrowshahi, Uber’s chief executive. “I’m gratified by our progress, steadily delivering against the commitments we’ve made to our shareholders on our path to profitability.”

Khosrowshahi previously said Uber aimed to make an operating profit by 2021. But on Thursday, he said the company would reach that milestone by the final quarter of 2020.

Nelson Chai, Uber’s chief financial officer, added that Uber expected to earn adjusted revenue of $16 billion to $17 billion this year as it worked to become profitable.

The company also plans to cut back on the discounts and coupons it has used to grow, he said, calling them “bookings that are essentially empty calories”.

Uber had gone into retreat for much of 2019 after staging a disappointing initial public offering in May.

The company, which spends a lot of money to attract passengers and drivers, immediately faced doubts over whether it could ever make a profit. Since then, Uber’s stock has plunged.

In response to its critics, Khosrowshahi has cut costs at the company and pulled back parts of its business. Last year, he laid off more than 1,000 employees and withdrew Uber’s food delivery service from South Korea.

“Clearly, Uber has put out a somewhat aggressive timeline for profitability,” said Tom White, a senior equity analyst at DA Davidson. “These exits are partly a function of them making sure they meet that target.”

Uber is dealing with other challenges. On January 1st, California legislation went into effect that may force the company to reclassify its drivers, who are freelancers, as employees.

That would drive up Uber’s costs because it would have to provide them with benefits and other perks.

Uber last year filed a suit to block the law and has asked for a preliminary injunction that would give it a reprieve from the new rules until the case was resolved.

The company also faces hurdles in London, one of its biggest markets. In November, London authorities decided not to extend Uber’s taxi operating license because of persistent safety problems. Uber continues to operate there while it appeals the decision.

“Regulation of ride sharing is finally catching up,” White said. “These businesses are looking less and less like these completely transformative, transportation-as-a-service models, and more and more like tech-enabled taxi companies.

“You have a lot more regulation, a lot more fees and a lot more oversight, which generally raises costs.”

It has not been all bad news for the company. A court in Brazil ruled Wednesday that Uber’s drivers could not be considered employees. – New York Times