Company says zero-carbon emission delivery will be rolled out to Cork, Galway, Kilkenny, Limerick and Waterford by the end of 2020 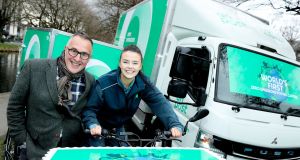 An Post chief executive David McRedmond: “we’ve accelerated our commitment to reduce our carbon footprint by 50% from 2030 to 2025”

Every An Post letter and parcel delivery in Dublin city centre is now emission free, the company said on Friday.

It said the addition of 7.5-tonne electric trucks called Fuso eCanters to its existing electric fleet means all post in the city is now carried by 47 zero-emission vehicles, avoiding 450 tonnes of CO2.

It said this would benefit the health and air quality of 512,000 people living and working in the city each day. It has also begun the roll-out to the suburbs, and is already in a number of delivery areas.

Zero-carbon emission delivery will be rolled out to Cork, Galway, Kilkenny, Limerick and Waterford by the end of 2020, benefiting the lives of a further 700,000 people.

The company has already invested €7.5 million in its electric fleet of 212 electric vehicles, and this number will exceed 900 within two years. An Post said all its electricity comes only from renewable resources.

“We’ve proven that zero-carbon emission delivery in a capital city is achievable. If An Post can do this, delivering to more than 70,000 premises daily in this area, there is no reason why other companies can’t. Let’s aim for a 100 per cent green delivery zone in Dublin.

“The Government has set out a climate action plan, and we all need to respond: we’ve accelerated our commitment to reduce our carbon footprint by 50 per cent from 2030 to 2025.

“We’re going through a massive transformation from the old world of letters to the new world of ecommerce parcels, rebuilding our infrastructure for a profitable, sustainable business.

“We need to increase our fleet to deal with the volumes of parcels, but we know we have to do this responsibly which is why we are committed to being the leader in electric vehicles.

“Over the next five years we will also substantially rebuild our estate of sorting offices and mail centres, and we will ensure the highest AAA standard to vastly reduce emissions.”

Friends of the Earth deputy director Kate Ruddock said the group commended An Post for the move.

“We also commend An Post for rolling-out their green delivery zone to other major cities and towns across Ireland, whilst calling on other organisations to do the same, benefitting the health and air quality of the country,” she said.

An Post has committed to eliminating 50 per cent of carbon from all postal and delivery operations in Ireland by 2025 – having brought forward the commitment from 2030, thus saving 20,000 tonnes of carbon – and 100 per cent by 2040.

It said to achieve its commitment to reduce carbon emissions and for cleaner air quality in Irish cities it would only acquire electric vehicles over the next two years.

10 Vodafone goes up against rivals with new Clear Mobile offering