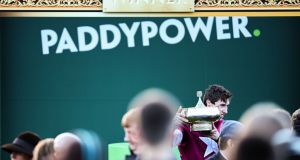 Brands controlled by Flutter and Stars make up about 40 per cent of the UK’s online sports betting market. Photograph: Inpho

The UK’s Competition and Markets Authority said it would investigate whether the deal would result in a “substantial lessening of competition” in the UK gambling market.

The investigation follows the CMA’s controversial last-minute intervention into a merger between the food delivery platforms Just Eat and Takeaway. com, which forced the companies to reconsider the timetable for the deal.

An investigation into the deal between Flutter and Stars, which was announced in October, had been expected by some, given recent moves by the CMA to focus more on competition online.

Brands controlled by Flutter and Stars make up about 40 per cent of the UK’s online sports betting market. Analysts at Redburn estimated that the two companies control about 26 per cent of the overall online gambling market in the UK – close to the 25 per cent threshold over which the CMA takes an interest.

The deal is expected to close in the second or third quarter of this year depending on the CMA’s findings and, if successful, will create the largest online betting operator in the world by revenue. – Copyright The Financial Times Limited 2020

US retailers step up security and close stores after looting 18:04
World stocks climb to three-month highs despite US unrest 18:03
Danish jeweller Pandora to use only recycled silver and gold 17:52
ECB set to expand bond-buying to soak up debt 17:39
Apple tax case: Four individual lawyers paid over €500,000 each 17:15

1 Should my mam wait for house prices to drop before buying?
2 Apple tax case: Four individual lawyers paid over €500,000 each
3 Parts of Brown Thomas and Arnotts to reopen next week
4 Thailand attempts to lure travellers with luxurious lockdown options
5 Brother is dragging his heels as executor of uncle’s will - is there anything I can do?
6 Covid-19 mortgage breaks: What’s the catch?
7 Stocktake: Has Warren Buffett lost the magic touch?
8 Irish whiskey sales near milestone of 12m cases a year
9 Irish comic book artist designs face mask coverings for young flyers
10 ‘I have a talent for justifying purchases’
Real news has value SUBSCRIBE