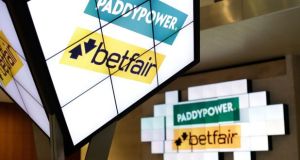 Paddy Power owner Flutter Entertainment said it has been notified by the Australian Competition and Consumer Commission that its planned £10 billion (€11.8 billion) merger with the Stars Group has been granted informal approval.

However, the deal is still subject to approval by the Australian Foreign Investment Review Board as well as other international regulatory bodies.

The company proposed the merger with the Toronto-listed group in October last year. Stars Group owns Poker Stars, Full Tilt and Sky Bet, and is a partner of US media giant Fox Corporation.

Merging with Stars will add four million more customers to Flutter’s current six million customers on three continents. The company has set its sights on the US following a a federal court ruling in 2018 that lifted a ban on individual states legalising betting on sports such as football, baseball and basketball.

In a research note, Davy said the receipt of competition approval in Australia was an important milestone for Flutter.

“Alongside the UK, Australia was identified as a jurisdiction where the business combination was expected to be most heavily scrutinised,” the note said. “Accordingly, its successful conclusion is positive, with a potential obstacle to the completion of the acquisition now successfully navigated.”

Earlier this month, competition authorities in the UK said they plan to review the merger between the two gambling groups. The Competition and Markets Authority said it would investigate whether the deal would result in a “substantial lessening of competition” in the UK gambling market.

Brands controlled by Flutter and Stars make up about 40 per cent of the UK’s online sports betting market. Analysts at Redburn estimated that the two companies control about 26 per cent of the overall online gambling market in the UK – close to the 25 per cent threshold over which the CMA takes an interest.

1 Aldi to impose limits as Christmas toys go on sale
2 Irish elearning company LearnUpon closes €47.4 million investment
3 Central Bank finds litany of shortcomings in fund firms
4 Bank of America names new EU hub head as Brexit looms
5 Ryanair and Eir the worst for customer service during Covid crisis
6 What to consider if older person or loved one needs care at home
7 Fair deal? Family at odds with hospital and each other not so sure
8 S&P sees Irish house prices falling by 1.6% this year
9 ‘Essential’ retailers risk a firestorm if they exploit the closure of the ‘non-essential’
10 Streaming services set for Christmas battle after drama-filled year
Real news has value SUBSCRIBE