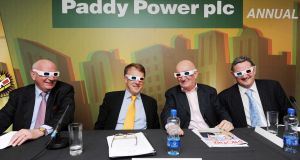 A statement from Richard Power confirmed on Wednesday that he has decided to retire following the 2018 Cheltenham Festival next month.

“As a consequence, Richard Power Bookmakers will cease taking bets in March after the festival and a managed wind down will take place over the subsequent months of 2018,” the statement said.

Mr Power’s decision means that Irish and British betting rings will lose one of their best-known and longest-standing figures.

He has been working in the betting industry since 1970 when he joined Richard Power after qualifying as a chartered accountant.

He worked at race courses and oversaw the running of the company’s betting shops.

In 1988 he made a deal with Stewart Kenny and John Corcoran to merge those shops with their businesses.

The agreement established Paddy Power, which the trio set up to combat the growing presence of British chains such as Ladbrokes.

Paddy Power merged with Betfair in 2016 to form one of the world’s biggest betting companies.

Its brand is one of the best-known in its industry. The group has Irish and British bookie shops, European and Australian on-line betting and gaming operations, and several US businesses.

A closing quote of €91.10 a-share on the Dublin Stock Exchange valued Paddy Power Betfair at €7.7 billion on Wednesday night.

That stake comes to 4.15 per cent of the company and was worth more than €300 million at Wednesday night’s closing price.

While he worked on establishing Paddy Power, he continued with Richard Power as an on-course bookmaker and private client business.

His son Willie Power now runs the company and will oversee its wind down. It employs seven people.

Mr Power’s grandfather, Richard, established the business in 1895 in Waterford. He grew it to take stands at courses in Ireland and England, where he worked in the same betting rings as the founder of William Hill and other future rivals to today’s Paddy Power Betfair.