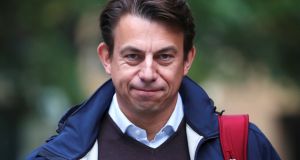 Former Tesco finance director Carl Rogberg: the 51-year-old is in hospital following a heart attack last Thursday, prompting Judge Deborah Taylor to say it would not be right and proper to continue with the trial. Photograph: Hannah McKay/Reuters

The fraud trial of three former Tesco directors has been abandoned after one of them suffered a heart attack more than four months into the high-profile case. Carl Rogberg, the 51-year-old former finance director of Tesco UK, is awaiting bypass surgery in hospital following a heart attack last Thursday, prompting Judge Deborah Taylor to say it would not be right and proper to continue with the trial.

Mr Rogberg and his fellow defendants Christopher Bush (52), the former managing director of Tesco UK, and John Scouler (49), the company’s former UK food commercial director, were accused of fraud and false accounting at Britain’s biggest retailer in 2014. They denied any wrongdoing and had pleaded not guilty.

The Serious Fraud Office (SFO) will now weigh whether to pursue a new trial, with a decision expected on March 2nd, and the judge said a retrial could be timetabled for September. On Tuesday the judge lifted reporting restrictions which had been placed on Monday’s move to discharge the jury and on Mr Rogberg’s heart attack.

The trial, which began in September, has been dogged by multiple delays and lawyers estimate its total cost at up to £10 million. Mr Rogberg’s lawyer Neil O’May told reporters at Southwark Crown Court in central London his client was devastated that the trial had been aborted.

“He was always very anxious that the jury should be allowed to reach its verdict and is desperately sorry that they were not allowed to do so,” he said, adding that Mr Rogberg had waived his rights to attend the latter stages of the trial.

The SFO, which does have a recent history of pursuing retrials in some cases, said it was considering its options. “It is not simply a question of wasted costs on all sides, but the devastating effect on the lives of the defendants,” Alison Geary, counsel in WilmerHale’s UK investigations & criminal litigation practice, said. “The SFO will now need to decide whether a retrial is appropriate,” she added.

The Tesco case centred on its September 2014 announcement to the stock exchange that its profit forecast had been overstated by £250 million, mainly due to booking commercial deals with suppliers too early.

Tesco’s disclosure, made three weeks after current chief executive Dave Lewis replaced Philip Clarke, wiped £2 billion off its market value and plunged the company into the worst crisis in its near 100-year history.

The trial, which began on September 29th, had been nearing a conclusion, with the judge due to deliver her summing-up, but the jury of seven men and four women were told it had been halted due to Mr Rogberg’s illness. “It would not be right and proper in the circumstances to continue with this trial,” the judge told the jury, thanking them for their “diligence and good humour”.

The trial had originally been expected to finish by Christmas but was delayed due to legal argument, the judge falling ill and a juror taking a pre-planned holiday. Mr Bush did not comment beyond saying in a statement: “All my thoughts are with Carl and his family and I wish him a speedy recovery.” Mr Scouler’s representatives did not respond to requests for comment. – Reuters