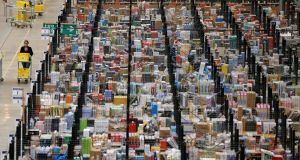 Amazon’s centre in Peterborough, England. A report from Retail Ireland report indicates that events such as Black Friday and Cyber Monday are hoovering up spending in the run-up to Christmas. Photograph: Phil Noble/Reuters

Shoppers’ dramatic shift to the internet in search of better value and more choice is causing one of the biggest structural changes in the history of Irish retail, according to a new report from the group that represents the sector.

The report also shows that events such as Black Friday and Cyber Monday are hoovering up spending in the run-up to Christmas and warns that much of the money is now disappearing from the economy as UK-based traders benefit.

In its latest monitor, published on Monday, Retail Ireland said a growing disconnect between increasing consumer disposable income and the “unspectacular” performance of a range of retail categories over the crucial Christmas trading period was evidence of a dramatic pick-up in online retail sales and changed consumer spending patterns.

“Christmas 2017 will show record online sales with the Irish consumer now more comfortable than ever shopping in the virtual world,” said the Ibec group’s director, Thomas Burke. “This lays the challenge squarely at the door of the traditional Irish retail sector.”

He noted that most online trade leaves the State with some putting an estimate of 70 per cent of all digital purchases taking place on websites based outside of the Republic.

“For some retail categories we have reached a critical point, where failure to act in the short term will lead to closures and the gradual disappearance of certain retail formats from our high street,” he said.

“A clear digital strategy will be crucial in ensuring the future of such businesses who must embrace the challenge at all levels of the organisation.”

He also called on the Government to focus on the “costs associated with retailing in the State”. “A growing cost base linked to increasing local authority rates, insurance premiums, regulatory red tape and Government-mandated wage rates all give an undue advantage to their competition, most likely based in a warehouse in a city or town in the UK,” he said.

He added: “Such an imbalance in the respective competitive positions is not sustainable and requires a creative approach by Government in the short term.”

The Retail Ireland report also highlights another key trend in Irish retail over recent years with sales in December falling by 0.7 per cent when compared with those in November. This suggests the growing importance of promotional events such as Black Friday and Cyber Monday, which are now actively displacing consumer spending from later in the Christmas season.

“The jury remains out on the longer-term impact of promotional events such as Black Friday,” Mr Burke said. “Some in the industry suggest they are merely bringing forward purchasing decisions at the expense of profitability due to discounting. Others say it launches the Christmas shopping season and helps to promote additional spend over the elongated season.

“What is clear is that it is another disrupter of traditional end-of-year retail sales patterns, and that it is also impacting the standing and importance of the traditional January sales period.”

The report also indicates that December was a good month for grocery retailers, with the the multiples collectively holding their own against the discounters, but only through very aggressive price discounting, particularly in beverage lines.

1 Bank leaked my loan request to family who tried to rip me off
2 Irish companies restrict travel over coronavirus fears
3 Suspicions rife as key Brexit trade talks begin in Brussels
4 Corona beer firm reeling after 8% slide due to coronavirus
5 Coronavirus rocks financial world as hopes for containment fade
6 Rolls-Royce surges on hopes of solution to Boeing 787 engine glitches
7 How well paid do you think you are? Here’s how to work it out
8 How Tony Buzan used mind maps to doodle his way to millions
9 How to . . . upgrade your console’s storage
10 Refusal for conversion of offices to Airbnb-style rental
Real news has value SUBSCRIBE