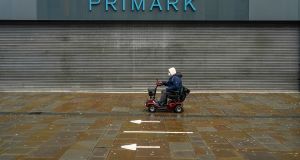 Penneys-owner AB Foods warned that the loss of sales from store closures could rise to over £1.5 billion (€1.69 billion) if current lockdowns last until the end of March, but the group is confident of strong growth upon reopening.

Unlike most rival retailers, which continue to trade online during lockdowns, Primark – which trades as Penneys in Ireland – does not have an online shop meaning lockdowns in its main markets have halted sales as 76 per cent of its retail selling space is shut.

Finance director John Bason said that the hit would rise by an extra £500 million (€562 million) if the pandemic kept all those stores closed until the end of March.

He declined to say when he expected lockdowns to end, but said he was confident on future growth.

“I think people will come flooding back to the stores when we reopen,” he said.

“We’ve come through two lockdowns and we’re traded really well after both of them.”

AB Foods, which has suspended group earnings guidance due to the pandemic, said that it now expected Primark’s adjusted operating profit to be “somewhat lower than last year”, downgrading a December forecast for it to be higher.

AB Foods also has a grocery division, whose brands include Kingsmill bread and Twinings tea, as well as major sugar, agriculture and ingredients businesses.

Those units were performing strongly, it said on Thursday, with home baking and high demand for supermarket goods driving growth and it expected their adjusted operating profit to be “well ahead of last year”.

Brexit had not caused any material disruption to its supply chains, AB Foods added. – Reuters