France issues ‘clear and final no’ over Carrefour takeover bid 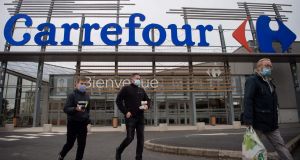 Under French law the government can review takeovers of domestic companies by foreign buyers in sectors it deems strategic. Photograph: AFP via Getty

France has reiterated its opposition to the €16.2 billion takeover of supermarket group Carrefour by Canada’s Alimentation Couche-Tard, dealing a major setback to the groups’ hopes that they could overcome government concerns over food security and jobs.

“My answer is extremely clear: we are not in favour of the deal,” said Bruno Le Maire, French finance minister, in an interview with BFM TV on Friday. “The no is polite but it’s a clear and final no.”

The companies had continued negotiations on a deal, according to people familiar with the matter, even though the government had already signalled its concerns on Wednesday about how the tie-up would threaten France’s “food sovereignty”.

They were discussing pledges on jobs, suppliers, governance and management, in addition to the €20 per share price of the initial offer.

Alain Bouchard, Couche-Tard’s co-founder and chairman, flew to Paris on Thursday in an effort to secure a meeting with Mr Le Maire to present him with the proposal, the people said.

However, Mr Le Maire’s latest intervention seemed aimed at scuppering the deal before it got to his desk.

Under French law the government can review takeovers of domestic companies by foreign buyers in sectors it deems strategic, such as energy, water or telecoms. France has gradually expanded the list of areas covered by the regulation and last year added “food security”.

“We have the legal tool available to us [to block the deal], even if I would prefer not to have to use it,” Mr Le Maire told BFM TV.

“What’s at stake is the food security of our country...especially after the [Covid-19] health crisis has taught us how no price can be put on it.”

Carrefour’s shares were down about 4 per cent in morning trading. – Copyright The Financial Times Limited 2021