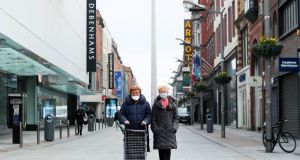 The head of insolvency at one of Ireland’s top corporate law firms has warned that recent criticisms of the State’s scheme to pay 70 per cent of workers’ wages through the sCovid-19 crisis are “without foundation” and risk “social disaster”.

Willie Day, head of the restructuring and insolvency practice in Arthur Cox, says anyone who advises SMEs not to sign up to the wage subsidy scheme and lay off staff instead will carry a “heavy responsibility”.

Mr Day insisted that fears held by critics who argue that employers declaring they are unable to pay wages could mean them admitting to trading while insolvent, are based on “misunderstandings” of the law.

Under the scheme, the State will pay 70 per cent of wages, capped at €410 per week, if the employers declare that Covid-19 has cut sales by a quarter and they cannot make payroll. The affected workers are then kept on the company’s books instead of being laid off.

Some small business groups and the Law Society raised concerns with the Government last week about this provision of the scheme, which was outlined in emergency legislation that passed through the Oireachtas last week.

The Irish Small and Medium Enterprises Association (Isme) warned last week it would have difficulty advising its members to sign up to the scheme for reasons including that the unpaid wages declaration could mean admitting to trading while insolvent. It said the scheme was “tone deaf”.

“As currently drafted it is unlikely most employers would avail of the provision, and thus the stated aim of the legislation would be stymied,” she wrote.

She said the concerns went to the “fundamental operability” of the legislation, although the society stopped short of saying companies should not sign up to it.

Mr Day said “commentators need to be very careful about scaring employers off this scheme”, after client companies of Arthur Cox contacted his colleagues in the employment section over the fears.

Mr Day said the notion that you have to declare insolvency to sign up is a “misunderstanding” and the most important thing is not whether or not a company is insolvent, but how it behaves while it is so.

“If you make such a declaration in good faith based on reasonable evidence, this will be accepted. Revenue has stated explicitly that if they seek to validate employer eligibility for the scheme, they will adopt a reasonable, fair and pragmatic approach in considering whether the criteria have been met.”

He said the critics of the scheme had taken a “literal approach” to interpreting the law, which he said “works in hindsight” in terms of validating behaviour.

1 Michael Smurfit: ‘I asked Trump to invite me to the White House for my 80th birthday’
2 ‘I’m so lucky to be in the Caribbean – a million miles from Derry Girls’
3 Small businesses are cannon fodder in zealous anti-virus experiment
4 Household savings soar as consumers stop spending
5 Tax and the Pandemic Unemployment Payment: Your questions answered
6 ‘Never mind GDP; the most fundamental job of any leader is to keep his people alive’
7 Irish business of Carluccio’s restaurants to be wound up
8 ‘The recovery needs to be a full-scale economic renewal’
9 Donohoe tweaks wage subsidy scheme so mothers returning from maternity qualify
10 ‘It’s safe to fly’, EU aviation safety boss says
Real news has value SUBSCRIBE