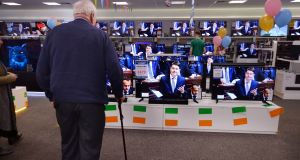 A consumer is seen at the Harvey Norman outlet at the Airside Retail Park in Co Dublin. File photograph: Alan Betson/The Irish Times

Harvey Norman, the Australian furniture and electronics chain with 15 stores in Ireland, is expanding further into the west of Ireland with new stores in Galway and Sligo.

The chain, whose Irish sales boomed during lockdown, will open a new large format 60,000sq ft split-level store on the outskirts of Galway on July 22nd, at Gateway Retail Park in Knocknacarra. The store will employ up to 50 staff.

It is also planning to open a new store in Sligo at the end of October, at the Carraroe retail park.

The Galway outlet will be among the largest in Harvey Norman’s Irish estate, which currently comprises 13 outlets in the Republic, including five in Dublin, and two stores in Belfast. It is a new-build store which will sit alongside other Gateway tenants, including Dunnes Stores and B&Q.

The shop will also house a cafe operated on a concession basis by Northern Ireland operation Synge & Byrne. The latter already operates a cafe for Harvey Norman in its Boucher Road site in Belfast. The Galway cafe was originally designed for about 80 seats, but its capacity will be reduced for now because of social distancing rules amid the Covid-19 pandemic.

Peter Hearn, the chief executive of Harvey Norman Ireland, said it has been trying to get the right site in Galway for more than a decade, and that the current project there has been in train for two years.

The Galway store was due to open in April, but this date was abandoned due to the coronavirus lockdown. As soon as workers were allowed back on-site from May 18th, it pushed for a July opening.

Mr Hearn took over Harvey Norman Ireland from Blaine Callard for his second stint here , after originally bringing the chain to Ireland back in 2003 for its Australian-listed parent group. He said the chain remains “committed” to expansion in Ireland, despite the pandemic.

He also said “some sectors” of the economy remain relatively strong, in spite of the spike in unemployment.

“So they’re spending money on their homes, the little creature comforts like new sofas and televisions. They’re also investing in home office furniture and new devices so they can work from home,” he said.

Harvey Norman Ireland made a small profit of just in excess of €100,000 on sales of €206 million for the year to the end of June 2018, according to the most recent set of financial statements it has filed here.

The business performed extremely well during lockdown, however, through its online sales division. In a recent trading statement delivered to the Australian stock market, it said its Irish sales were up 25 per cent in its half year to the end of May, when translated into Australian dollars.

Some of the increase is accounted for by a moderate appreciation in the value of the euro versus the Australian dollar.