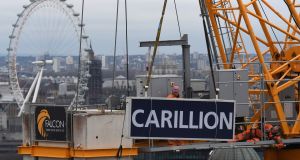 UK regulators have set deadline for the first structural overhaul of the way Big Four auditing firms operate since a string of reviews prompted by the failure of outsourcer Carillion. Photograph: Daniel Sorabji/AFP/Getty Images

The UK’s Big Four accounting firms have until 2024 to separate their audit practices following a severe edict from the accounting regulator that marks the largest shake-up of the industry in decades.

The Financial Reporting Council (FRC) has issued principles for the operational separation of the audit units of PwC, Deloitte, KPMG and EY. The firms must outline their plans to implement all 22 of its principles by the end of October, and have completed the measures by June 2024.

It is the first structural overhaul of the way the firms operate since a string of reviews prompted by the failure of British outsourcer Carillion.

Audit reform has been thrown into sharp focus in recent years by high-profile corporate collapses such as at BHS, Thomas Cook, and most recently, Wirecard.

The regulator’s new principles require that the firms pay auditors in line with the profits of their audits, ringfence the finances of the audit division with a separate profit and loss account, and introduce an independent audit board to oversee the practice.

The Big Four generate around a fifth of revenues from their audit practices, which have been dwarfed by the rapid expansion of their advisory divisions in recent years.

The requirements are designed to improve audit quality and “audit market resilience” by ensuring that “no material, structural cross subsidy persists between the audit practice and the rest of the firm”, according to the regulator.

“In pursuing these objectives, we will seek to ensure that audit remains an attractive and reputable profession and increase deserved confidence in audit,” it said.

The FRC ruled that profit payments distributed to audit partners “should not persistently exceed the contribution to profits of the audit practice”.

It also said that auditors “should work for the benefit of shareholders of audited entities and wider society; they are not accountable to audited entities’ executive management”.

The regulator stopped short of requiring auditors to be paid from a separate pool of profits generated only from audit fees. Critics of the industry had recommended such a requirement in order to stop a real or perceived conflict of interest due to auditors being paid from the same profits as a firm’s consultants.

“Today, the FRC has delivered a major step in the reform of the audit sector,” said Jon Thompson, chief executive of the FRC.

The collapse of Carillion in 2018 sparked calls for an overhaul of the audit profession and an inquiry into KPMG, which had audited it for 19 years.

Since then, the competition watchdog has recommended that the government introduce legislation to break up the Big Four. The FRC is also set to transition into a new, more powerful statutory regulator called the Audit, Reporting and Governance Authority.

Deloitte’s head of audit and assurance Stephen Griggs, said: “We welcome this clarity from the FRC on the principles of operational separation and will continue working with them to develop our plans over the coming months.