Sia plans to double size of Irish business in next three years, adding up to 60 staff 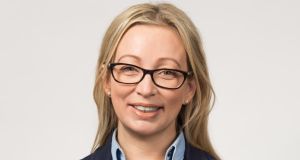 Irene Molodtsov, UK and Ireland chief executive of Sia: “We started looking for an acquisition about one year ago and we came across Pathfinder in the third quarter of last year.”

Global management consultancy Sia Partners has bought Irish consulting group Pathfinder and says it plans to more than double the size of the business over the next three years with the addition of up to 60 staff.

Sia says it bought the Dublin company partly because Facebook and Microsoft, two major clients of Sia, have their European headquarters in Ireland.

“We needed a base from which to service those two major clients globally,” said Irene Molodtsov, the UK and Ireland chief executive of Sia.

She said it will also look to grow Pathfinder’s existing client base, which includes companies such as listed clinical research group Icon, agribusiness Dairygold and the country’s largest hotel operator, Dalata.

Pathfinder was founded in Dublin in 2006 and employs 40 consultants here, and 10 in its Scottish office in Edinburgh – Scottish Water is among its major clients.

The Irish business was sold to Sia by the six partners who all owned an equal share. Pathfinder’s latest accounts showed shareholders funds of €1.4 million. Sia, which has 1,650 consultants globally, has annual turnover of about $300 million. Ms Molodtsov said the firm was aiming to break the $1 billion barrier in coming years to challenge the so-called top-four consulting firms.

“We started looking for an acquisition about one year ago and we came across Pathfinder in the third quarter of last year,” she said. “Ireland’s management consulting market is very much governed by the top four (Deloitte, KPMG, PwC and EY) as well as a few smaller mom and pop shops.

“We will try to double the business in size quite quickly, perhaps by 2023. We are very interested in picking up clients such as Dairygold and Icon. There is also a good overlap between the client bases of Sia and Pathfinder in insurance, banking and utilities.”

Although the transaction was in train before the arrival of the coronavirus pandemic, Ms Molodtsov said it did not affect the transaction, which officially closes on Friday.

“Anyway, Ireland appears to have managed the crisis in an exemplary fashion. The tech giants that we work with, which are also based in Ireland, are used to working in a dispersed way. Banking hasn’t been affected, nor has life sciences, which we are also big in. So the coronavirus made no difference.”

The Irish partners will stay on to work in the business. Gary O’Sullivan, a partner in Pathfinder, said the deal was a “natural fit”. He said Sia and the Irish firm had already started jointly working on client projects even before the transaction had completed.