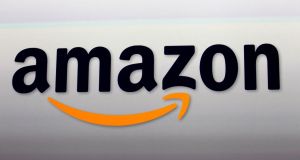 The European Commission’s competition office is planning to release what is known as a statement of objections against Amazon, sources said. Photograph: Reed Saxon/AP

European Union officials are preparing to bring competition charges against Amazon for abusing its dominance in internet commerce to box out smaller rivals, according to sources.

The charges against Amazon are part of a growing effort by Margrethe Vestager, the European commissioner who leads antitrust enforcement and digital policy, to address what she and other European authorities believe is a worrying consolidation of power in the digital economy.

Amazon employs about 1,500 people in the Republic.

The EU regulators have determined that Amazon is stifling competition by unfairly using data collected from third-party merchants to boost its own product offering, said the sources. An announcement could come this summer, although the timing is still in flux, one of the sources said.

The European Commission’s competition office is planning to release what is known as a statement of objections against Amazon, which outlines its conclusions about how the US retailer has violated antitrust laws. The commission started investigating Amazon in 2018.

Amazon declined to comment, as did the commission. The case stems from Amazon’s treatment of third-party merchants who rely on its website to reach customers. Investigators have focused on Amazon’s dual role as both the owner of its online store and a seller of goods that competes with other sellers, creating a conflict of interest.

Authorities in Europe have concluded that Amazon abuses its position to give its own products preferential treatment. European officials have spent the past year interviewing merchants and others who depend on Amazon to better understand how it collects data to use to its advantage, including agreements that require them to share certain data with Amazon as a condition of selling goods on the platform.

Many merchants have complained that if they have a product that is selling well on Amazon, the company will then introduce its own product at a lower price or give it more prominent placement on the website.

It is not the first time the European Commission has targeted Amazon. In 2017, officials ordered Luxembourg to recover from Amazon roughly €250 million in unpaid taxes. That same year, Amazon settled a competition case concerning its contracts with book publishers for e-books. – New York Times Service