Caveat: A 17-county road trip reveals an industry battling fear, as well as its own old failings 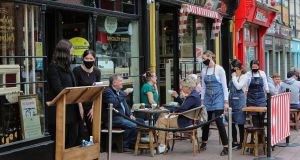 There is no need to rake over old ground. We already know the tourism and hospitality sectors have been hit like no other by the pandemic and its war on fun.

We could argue over whether this has been compounded by recent Government decisions, such as the petty move to force restaurants to close at 11pm, depriving many of their final evening sitting. (Has somebody discovered that the virus is nocturnal?)

To those who know the sector best, the State’s overall approach to the sector is weighed down by an overabundance of caution and a tin ear for expertise that doesn’t come wearing a stethoscope and white coat. Policymakers who wearily claim to be just “following the science” would do well to remember that economics is a science too and we should not ignore it when dealing with an industry in mortal danger, like tourism and hospitality. Help it breathe or it will die.

But if we have a frightened Government, it is because it is leading frightened people. That fear will not go away until the threat of the virus abates.

Until then, tourism and hospitality businesses – and the 265,000 people once employed in the sector –will remain reliant on State help, much of which has yet to arrive, which is in itself an indictment of Government.

In the meantime, is the industry doing enough to help itself?

I spent the last two-and-a-bit weeks travelling around Ireland with my family. Discouraged from taking a foreign break by the quarantining quandary, we turned our “staycation” into an epic road trip, passing through four provinces, two jurisdictions and 17 counties.

We made stops in eight counties with varying degrees of tourism pedigree – Fermanagh, Derry, Limerick, Waterford, Kerry, Roscommon, Donegal and Wexford, the latter four accounting for all of the overnight stays. In each, we found evidence of an industry in obvious crisis, with a surfeit of shuttered storefronts in what would normally be hotpots.

But we also found evidence of businesses innovating to survive, such as the tourist pub we visited in Donegal, Biddy’s O’Barnes, which previously only ever served pizza with its pints. It has reopened with a full food menu, a one-way customer system and a canopy in the carpark to allow it function effectively as an open air restaurant, driving much-needed cashflow. The pints were still good.

Inevitably, we also found instances where some businesses didn’t appear to be taking the threat of the virus seriously enough.

Masks in shops are a legal requirement from Monday, but they ought to have been a common sense requirement for staff in hospitality businesses everywhere since reopening started in early summer. They are an easy win in the fight against the virus, and also in the parallel battle to win the trust of wary customers. In too many places, masks were still not ubiquitous among staff.

Masks in shops have been law in Britain since July 24th, although not in Northern Ireland. Less than a week before that date, we stopped in a small village in south Fermanagh with the intention of eating lunch sitting on a stone wall: a simple pleasure.

My wife, masked up like Dick Turpin, went into the local shop to buy a sandwich and found she was being stared at as if she really were a robber. Amused, she cheerily asked the shopkeeper why she was the only one wearing a mask. “Ach, we don’t have to do that until next Friday,” he replied, as if the threat of the virus was holding off until that day, too.

The shopkeeper was mistaken on the date – there was widespread confusion in the North over its opt out from British policy. But his attitude was still baffling.

In Killarney – filled with domestic tourists paying prices tailored for Americans – our waitress wore a visor instead of a mask. But a visor is no use as a virus-fighting tool if it is opened up on its hinge, like a welder on a tea-break.

Surprisingly, we found the most impressive adherence to masks in one of the least traditionally “touristy” areas, west Roscommon, where we “glamped” happily in a yurt.

The Castlerea pub where we ate lunch, Hesters, appeared to be following every safety guideline to the letter and far more vociferously than anywhere else we visited. Many customers wore masks coming in and some only took them off when their food or drink arrived.

Many older people even wore masks on the street and nobody made a fuss about it. They were simply getting on with things.

This responsible attitude ought to bode well for the reopening of small, rural pubs, if policymakers can ever be convinced to give them a chance. Anecdotally, we found people and businesses in rural areas such as Roscommon were much more responsible than those in the usual urban tourist hotspots.

Enough domestic tourists have ventured out to throng areas that we had expected to be quieter. I was heartened when the woman working in the hotel in which we stayed on the glorious Hook Peninsula in Wexford told me that she didn’t have a room free for weeks.

Traffic on the Ring of Kerry, meanwhile, seemed quieter than usual, less snarled by tour buses filled with foreign visitors. Yet a local told me she had never seen the gardens of Muckross House so busy.

But, as always, greed is liable to rear its head in the Irish tourism industry, and the virus has yet to kill off this depressing tendency.

Here is an example. There was little self catering accommodation left in Kerry when we went to book. Through a popular website, I found a reasonable-sized three-bedroom house near Killarney for four nights for €1,000. It had also been available on Airbnb for €1,450, but, obviously, I went for the cheaper price.

Shortly after I booked it, and less than a fortnight before I arrived, I noticed that it was back up for rent on Airbnb for the same nights that we had it booked for €1,650, even though I had prepaid for it through a different site.

I contacted the owner to say I feared a double booking and she tried to reassure me, not very convincingly, that it was an “error” and my booking was solid. I didn’t believe her, and feared being gazumped. She was obviously seeking a higher price, even though our booking was confirmed.

Lo and behold, two days before we arrived and already 10 days into our road trip, the owner cancelled the booking, leaving us facing the prospect of arriving in Killarney with nowhere to stay. I confronted them over the phone, as well as contacting the website through which I was supposed to have a confirmed booking. The owner relented, proffering another flimsy excuse for the “error”, and the booking was restored. It left a sour taste.

Much of the domestic tourism industry is doing its best to survive while it waits for State help in the pandemic. But some things may never change.