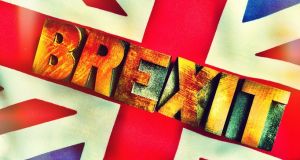 Both our columnists, Chris Johns and Pilita Clark, tackle Brexit.

Property price growth has slowed to its lowest level in five years, according to a report from Davy and property website myhome.ie, which is owned by The Irish Times. Eoin Burke-Kennedy has the details.

ESB is among the final bidders for a wind farm project off the Wicklow coast which could ultimately have a value of up to €2 billion, The Irish Times has learned. Jack Horgan-Jones reports.

Dale Farm, the North’s largest farmer-owned dairy co-op, has reported a 19 per cent jump in pre-tax profits to £12 million (€13.3 million) in its latest financial accounts despite the “big distraction of Brexit”, reports Francess McDonnell.

Manufacturing activity in the Republic has declined for the first time since 2013 as inflows of new business fell for the second straight month, according to AIB’s Purchasing Managers Index (PMI) for the sector. Eoin Burke-Kennedy reports. Eoin also tells us that Irish SMEs are three times more likely to use bank debt as their UK counterparts, according to a survey by financial services firm Smith & Williamson.

It’s that time of year so meet the EY Entrepreneur of the Year emerging finalists here.

No one is suggesting a no-deal Brexit would strike Britain with the force of a hurricane. But at least you know roughly what you are getting with a big storm, including when it finally ends. With Brexit, sadly, we are a long way from knowing even that, writes Pilita Clark.

Paschal Donohoe is standing in a river that could flow either way. Johnson would advise the sacrifice of yet another cat. In the land of grown-up politics that isn’t an option. In the circumstances the Finance Minister would be best advised to do nothing, just stand there, argues Chris Johns.

Find out what’s happening in the business week ahead with our comprehensive diary.Stay up to date with all our business news: sign up to our business news alerts and ourBusiness Today daily email news digest.