Andrew Keating to join CRH after leaving Bank of Ireland 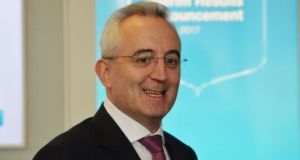 Andrew Keating, announced he was stepping down as chief financial officer at Bank of Ireland. Photograph: Alan Betson

Andrew Keating, who announced on Tuesday he is leaving as chief financial officer of Bank of Ireland, has agreed a deal to join CRH, the €23 billion-listed building materials giant that is Ireland’s largest company.

Mr Keating will not be joining CRH as chief financial officer, however. It is understood that the incumbent at CRH, Senan Murphy, will continue in his position as the head of the group’s finance function. Mr Keating is expected to join CRH as group director of finance, effectively reporting to Mr Murphy.

When it announced his departure, the bank said Mr Keating was leaving to take up “a senior finance role in an international organisation outside the financial services sector”. He also currently sits on the bank’s board of directors.

The bank also complained that State-enforced pay restrictions in Irish banks “hamper our ability to attract and retain the people we need to run and develop our business”, implying pay may have been a factor in the decision to leave.

Banker salaries are capped at €500,000, while banker bonuses are effectively banned via an 89 per cent special tax that can only be overturned with the approval of the Oireachtas. Bank of Ireland and AIB have lobbied the Government heavily to lift the caps, but so far Ministers have yet to budge.

Richie Boucher, the former chief executive of Bank of Ireland, sits on the board of CRH and is also a member of its remuneration committee. Bank of Ireland said that Mr Keating had told colleagues on Friday that he is joining CRH as “group director of finance”. CRH has yet to comment.

1 Will your boss let you work long-term from home – or from abroad?
2 Plans for €2bn Dart expansion lure Bombardier to Dublin
3 Virgin Media unveils new entertainment platform
4 Subway bread too sweet for the Irish tax authorities
5 Not just another brick in the wall
6 Google tells workers to return to country where they are employed
7 City firms move £1.2tn and 7,500 jobs out of London - EY
8 AA Ireland bought by Olivier Sarkozy-led fund for more than €240m
9 Only half the homes needed this year will be built, construction event told
10 McGuinness faces Brexit and Covid grilling at parliamentary hearing
Real news has value SUBSCRIBE