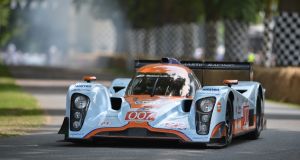 One of the most storied names in the annals of world motor sport, and a company with a strong Irish connection, is up for sale at £7 million.

Following the death of Irish businessman Martin Birrane in 2018, Lola Cars, based in Cambridgeshire, is now on the block.

Lola was originally founded by Eric Broadley, a man possessed of the same sort of genius for designing neat, effective racing cars as Lotus’ more famous and more bombastic Colin Chapman. When Broadley left Lola in 1997, forced out by financial calamity brought on by the failure of Lola’s Formula One bid that year, Birrane, who also owned the Mondello Park race track in Co Kildare, took over and built Lola back up.

The new owner will get a fully prepped and turn-key racing operation, one with an operational wind-tunnel that is renowned in both motor racing and aviation circles for the fidelity of its research and development work.

They will also be buying the incredible archive of Lola’s decades of motor sports endeavours, including complete drawings for such legendary cars as the 1960s T70 sports car, and the Honda- powered RA300 that won the 1967 Italian Grand Prix in the hands of the great John Surtees.

“The preference is to sell everything in one single package, but consideration will be given to separate sales of the windtunnel and the Lola assets,” a Lola spokesman said. “Martin Birrane cherished ‘everything Lola’ and his family’s goal is now to find a buyer with the necessary ambition, tenacity and drive to write the next chapter in Lola’s illustrious 62-year history.”

Speaking to The Irish Times shortly before his death, Mr Birrane waxed lyrical about the team that he built up at Lola. “There’s still a sense of unfinished business with this one. At my age, and I’m an octogenarian, there isn’t time for me to start and do it all over again. I was 62 when I took Lola on. In fact, I had literally bought the house and we were on our way to Ireland and into retirement, I had bought a nice place in Killiney, ” said Birrane.

“I do hope someone else has a crack at this though, because I’d like to keep the Lola name going. I do want to see the name back up the front again, because Lola has the winning knack.”

Lola’s assets include a 975sq m factory, the wind tunnel, tooling, equipment, and a high-tech seven-post rig, designed to replicate the stresses and strains of lapping a race track on a new car.

The sale of Lola won’t affect the ownership of Mondello Park, nor the extensive collection of original Lola (and other) racing cars housed in Mondello’s museum. The Birrane family are keen to retain ownership of them.

“It is anticipated that this opportunity will be of interest to someone looking to restore the Lola brand’s position in modern motorsport, providing third-party engineering services, supplying genuine Lola spares to support the thousands of Lola cars that still race today, manufacturing continuation cars such as the iconic Lola Mk1 and T70, and producing Lola race cars and roadgoing supercars,” the Lola spokesman said.