With only 10 years’ PRSI, will I be worse off on retirement next year?

Q&A: I believe I should get an Irish contributory pension of €233.60 a week 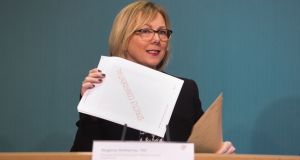 Minister for Social Protection Regina Doherty has promised that no one would be left worse off under the new pension arrangements. Photograph: Gareth Chaney Collins

I am 66 years old next year. I started working in Ireland in September 2006.

By the end of this year, I will have approximately 530 PRSI class A payments, and I will have worked in Ireland for 13 years. My yearly average will be 40.76.

I believe I should get an Irish contributory pension of €233.60 a week. Is this correct?

Will the changes announced recently by the Government, with regard to the availability of total contributions approach this year, prevent me from getting an Irish contributory pension of this amount?

The Minister promised when she made her announcement regarding changes to calculation of entitlement to the State contributory pension that no one would be left worse off as a result of the changes she announced, and your position is precisely why that assurance was given.

Under the current “yearly averaging” system, you have an average of almost 41 PRSI stamps a year even though you have only just over 10 years’ stamps because you started working here quite late in life.

The minimum requirement is that you have 520 full stamps and you will be just over that threshold as well.

As you say, on the basis, on current rates, you would get €233.60 a week from the date of your 66th birthday, just shy of the current maximum state contributory pension rate of €238.30. Of course, this rate will be slightly higher by the time you retire early next year because Budget 2018 added €5 to the maximum state contributory pension rate from the end of March 2018.

Under the new system announced by the Minister – the Total Contributions Approach – you would need 40 years of contributions for a maximum pension and, as it stands, your contributions record would entitle you only to around a quarter of the full rate.

As you would be worse off under the new system, you will be treated under the old arrangement and will receive close to the full pension.

However, while you will be okay, it is worth noting that, after 2020, when the new system is fully rolled out, anyone retiring with only a short work record in Ireland – such as yours – will get a dramatically reduced pension than they would have done under the old arrangement.

1 Coronavirus: Construction sector most significant part of new shutdown
2 Wetherspoon’s panto-villain chairman may have the last laugh
3 Volkswagen burning through €2bn in cash per week
4 British exceptionalism backfires in style as Johnson tests positive for coronavirus
5 Can husband keep savings and half the house in divorce?
6 Remote working doesn’t suit everyone, and it exposes woolly leadership
7 Rivian takes on Tesla with big batteries and subtler approach
8 UK needs to be honest about its Covid-19 strategy
9 Coronavirus: Medtronic aiming to make 500 ventilators a week
10 Mobile, broadband suppliers to be given extra radio spectrum
Real news has value SUBSCRIBE
Save money on international transfers