Pension changes not just turning the clock back to 2012 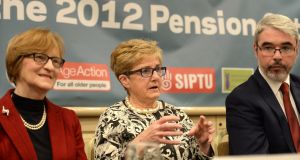 My understanding of the pension reforms announced by Minister for Social Protection Regina Doherty in the Dáil on Tuesday was that they restored the position for contributory State pension to that which applied pre-2012 changes.

- abolished the allowance for time out to raise children introduced in April 1994;

The September 2012 changes did two things:

- they increased the minimum number of PRSI contributions required to qualify for the State contributory pension to 520 from 260;

The 2012 changes most certainly did not abolish the Homemakers Scheme – the scheme introduced in 1994 to allow women (and men) take up to 20 years out of work to care for children under the age of 12 or older people who are either ill or disabled and receive PRSI credits for that time. That remains in force.

And the 2018 changes do not restore the position that applied before 2012. The higher 520 minimum threshold remains in place and so do the bands – precisely as they have been for the past five years.

However the bands only apply under the “yearly averaging” system, which is what has been in place to now – ie you work out how many stamps you have paid over your entire working life (from the first stamp in your first job, even a student job to the time you reach 66) and divide them by the number of years/months involved.

What the Minister has put in place is a new total contributions approach as an alternative. Under that, you get a full pension if you have gathered 40 years of stamps – regardless of gaps in your working life.

This also includes stamps credited while on many welfare payments and also while taking care of children or ill adults for up to 20 years.

The Minister has also introduced a new homecaring credit – in reality an extension of the existing homemaker’s scheme – to include anyone who took time out from work to care for family before 1994 and who qualified for the State pension after September 1st, 2012.

This will make quite a difference for some older people (especially women) who missed out on the homemaker’s scheme because their children were older than 12 by 1994.

Please send your queries to Dominic Coyle, Q&A, The Irish Times, 24-28 Tara Street, Dublin 2, or by email to dcoyle@irishtimes.com. This column is a reader service and is not intended to replace professional advice

1 Chris Johns: Past is another country when it comes to our post-pandemic future
2 Michael Smurfit: ‘I asked Trump to invite me to the White House for my 80th birthday’
3 Small businesses are cannon fodder in zealous anti-virus experiment
4 ‘I’m so lucky to be in the Caribbean – a million miles from Derry Girls’
5 Ireland stands to benefit in a big way from investing in public transport
6 Tobacco makers still trying to make a mint from Irish menthol market
7 Ryanair expects air fares to fall when flights take off again
8 Joint accounts: if one of us dies, can the other access the money?
9 ‘The recovery needs to be a full-scale economic renewal’
10 Minister calls on EU to act against tobacco firms ‘undermining’ menthol ban in Ireland
Real news has value SUBSCRIBE
Save money on international transfers