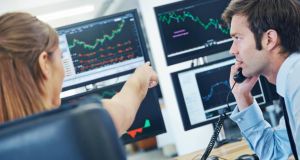 Data showed that 96.7 per cent of the visitors to one bitcoin-related website were male.

The bubble in bitcoin and other cryptocurrencies is almost unique in terms of price gains. Excluding the Dutch tulip mania of the 17th century, no other bubble in financial history can compare. In one respect, however, today’s cryptocurrency craze is just like countless other past bubbles – it’s an overwhelmingly male affair.

Duncan Stewart, director of research at Deloitte Canada, last month noted Google Analytics data showing that almost all – 96.7 per cent – of the visitors to the bitcoin-related Coin Dance website are male. While an unscientific way of measuring the matter, the Coin Dance figures are “backed up by other surveys, attendance at conferences, and my own interviews with millennial investors in North America and Europe,” commented Stewart. “I have been to multiple bitcoin and cryptocurrency conferences, and they have all been around 95 per cent male.”

The stats are relevant for two reasons, he argued. Firstly, they add weight to the argument that bitcoin is a testosterone-fuelled bubble, driven by animal spirits rather than cracking fundamentals. Secondly, they are a reminder that market bubbles in general may be a male phenomenon.

Stewart recalled his days as a technology fund manager during the 1990s. The more the tech bubble inflated, he said, the more male money managers outperformed their female counterparts. By 1999 and early 2000, male outperformance was “huge”, but that “all reversed” over the following two years as the bubble finally burst, when female money managers were rewarded for their refusal to get carried away by the mania for all things tech.

Sceptics might counter that these are merely anecdotes and that there were many female fund managers who were tech enthusiasts in the late 1990s. Similarly, the world of cryptocurrencies is not an exclusively male domain. Four of the 30 largest initial coin offerings (ICOs) in 2017 had female co-founders, according to Bloomberg data, with two of the female-led ICOs being among the biggest of the year.

However, the academic literature confirms that, as a general rule, bubbles are much more likely to develop when men are doing the trading. Thar “SHE” blows? Gender, Competition, and Bubbles in Experimental Asset Markets, a meta-analysis that examined 35 experimental asset markets from different studies, found a “marked gender difference in producing speculative price bubbles”. Price experiments involving all-male traders showed “significant price bubbles”; in contrast, all-female markets produced prices that were below fair value.

Experiments involving both male and female traders tended to follow a broad pattern: the more women in the market, the smaller the odds of a price bubble.

Testosterone may play a part in this, according to neuroscientist and former Goldman Sachs trader John Coates. Like Stewart, Coates has recalled how male traders were much more electrified than their female counterparts by the huge gains in technology stocks in the late 1990s. Many “displayed manic behaviour and a sense of infallibility”, said Coates, adding that it was “equally telling” that women “appeared relatively unaffected”.

His own subsequent experiments suggested that testosterone can drive feelings of excessive exuberance in men, with professional traders’ testosterone levels significantly elevated after they made above-average profits. This testosterone surge results in increased confidence and risk-taking, raising the risk of irrational exuberance and eventual market meltdowns.

A recent study published in the Journal of Economic Behaviour and Organisation, Psychological Momentum and Gender, also argues that testosterone may play a role in inflating market bubbles. In the study, the researchers noted the performance of male and female judo competitors over a four-year period, focusing on bronze-medal fights. Men were much more likely to win their bronze medal fight if they had won their previous bout, but no such pattern was evident among women.

This tallies with biological literature showing that rises in testosterone levels temporarily reinforce future success due to a feeling of psychological momentum – a perception that things are going unstoppably your way.

Psychological momentum influences men but not women, said the researchers, who posited that this had obvious implications for financial markets. Success in a first investment leads men to “increase their willingness to take additional risks and reinvest”, they concluded, adding that an increased share of female traders might reduce the creation of market bubbles.

However, while biology clearly plays a part in determining investment-related gender differences, it’s not true to say that women are invariably indifferent to financial manias – at least, not in China. Most of the aforementioned research into experimental asset markets pertains to western countries, prompting US and Chinese researchers to examine recently whether things were any different in China.

Social norms are different in China and radical communist policies promoting gender equality may have “increased females’ willingness to compete”, the authors suggest. Still, while the Chinese findings are intriguing, the fact remains that, in the West, men are much more likely than women to get caught up in deranged market bubbles.

As for bitcoin, the fact that it is characterised by an especially wide gender divide is troubling, according to Deloitte’s Stewart. Bitcoin being up thousands of per cent from a few years ago doesn’t tell you if it is a bubble, he says – many assets can enjoy stratospheric price rises and retain their value over the long term.

“But the fact that 95 per cent of the investors in bitcoin and other cryptocurrencies are men is a really big red flag for me. I cannot think of any security, currency or asset class in history that shows that extreme a gender divide and has been sustainable.”