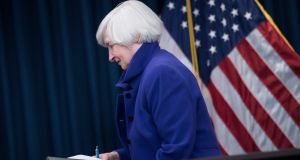 Janet Yellen: despite an excellent term as head of the Federal Reserve, she was passed over for a second term by US president Donald Trump. Photograph: Brendan Smialowski/AFP/Getty Images

Something shocking happened last week – stock markets fell. “Stocks get crushed in one of their worst days since Brexit” headlined Business Insider last Tuesday, after markets suffered two consecutive days of selling. In reality, a two-day fall of 1.8 per cent is perfectly healthy, but this one seemed a little scarier because it had been so long since stocks experienced any kind of selling pressure.

The S&P 500 had gone 99 trading days without a 0.60 per cent decline – the longest streak in history, noted Bespoke Investment. It had gone 310 trading days without experiencing back-to-back trading losses of 0.5 per cent, double the length of the previous longest stretch. Even after the selloff, some measures indicated the S&P 500 remained technically overbought. Indeed, January’s 5.6 per cent bounce was the biggest monthly gain since March 2016.

In a normal market, last week’s declines would scarcely be noticed, but this has not been a normal market. When a proper correction finally arrives, cautions Bespoke, “it’s going to feel exponentially more painful for investors because of the simple fact that we haven’t experienced any kind of meaningful pullback in so long”.

Investors may not have to wait too much long for a true correction, according to Goldman Sachs, which last week warned there is a “high probability” of a double-digit percentage correction in the coming months. Like many other strategists, Goldman noted the S&P 500 has never gone so long – more than 400 trading days – without experiencing a 5 per cent decline. Of course, calendar watchers have been making that point for months now, and stocks have kept going higher. Things are more worrisome today, however, because sentiment has just gotten too bullish, Goldman cautioning that its GS Risk Appetite indicator is now near its highest-ever level.

Goldman is right to note that the bull case remains intact, and that strong fundamentals – low inflation, easy monetary policy, rising profits, a growing global economy – make it likely any correction is unlikely to morph into a bear market. At the same time, the sharp rise in optimism and the rapid pace of market gains mean an increasingly expensive market is vulnerable to the slightest setback. “Correction signals are flashing,” says Goldman. It’s unlikely to be decisive, but technical factors and investor positioning “could make it rather painful”.

Janet Yellen’s four-year term as head of the Federal Reserve ended last week, and investors could be forgiven for getting a little nostalgic. Yellen is the only Fed chairperson under whom there was never a bear market. Stocks have instead risen steadily for most of the last four years, spending a greater percentage of days at all-time highs than that seen under any other Fed chairman. Of course, the Fed’s job is not to keep stock prices high; it is to maintain stable inflation and low unemployment, and Yellen has done just that. Unemployment has fallen from 6.7 to 4.1 per cent, inflation is contained, rates are slowly rising and the unwinding of the emergency stimulus measures of the last decade is progressing smoothly.

Consequently, experts sing her praises, with the vast majority of economists surveyed by the Wall Street Journal recently giving her an A grade. Her successor, former lawyer and investment banker Jerome Powell, is a well-regarded moderate who supported almost all of Yellen’s key decisions – Yellen-lite, without the academic expertise. The obvious question, then, is why has Yellen become the first Fed chairperson in almost 40 years not to be reappointed for a second term? Ask Donald Trump.

January proves a wicked a month for bitcoin

January was a painful month for bitcoin owners, the cryptocurrency enduring its worst monthly drop in three years after swooning 28 per cent. Bitcoin has more than halved since coming within touching distance of $20,000 in December. Last Thursday, it briefly fell below $9,000, a key technical support level.

Impossible to value, this bizarre bubble might go all the way to $100,000 or fall all the way down to zero. It’s still too early to say the bubble has burst

Fundstrat’s Thomas Lee, the only major Wall Street strategist issuing bitcoin price targets, had earlier marked $9,000 as a “major low” that, if hit, would represent “the biggest buying opportunity in 2018”. Lee sees bitcoin hitting $25,000 this year, although these kind of year-end forecasts are fanciful, to say the least. Impossible to value, this bizarre bubble might go all the way to $100,000 or fall all the way down to zero. It’s still too early to say the bubble has burst.

Bitcoin has rebounded from much bigger selloffs than the current one, which has been catalysed by growing hostility from global regulators and even from Facebook, the company last week announcing it was banning ads promoting cryptocurrencies.

At the same time, this has been the biggest bitcoin selloff in three years, not a run-of-the-mill correction. Stocktake’s stance is unchanged: the cryptocurrency world is a wild west. Caveat emptor.

1 British exceptionalism backfires in style as Johnson tests positive for coronavirus
2 Wetherspoon’s panto-villain chairman may have the last laugh
3 UK needs to be honest about its Covid-19 strategy
4 Will Covid-19 force Primark to rethink decision not to sell online?
5 Retail landlords worried rents will dry up during Covid-19 crisis
6 Interim examiner appointed to food distribution companies
7 Volkswagen burning through €2bn in cash per week
8 Remote working doesn’t suit everyone, and it exposes woolly leadership
9 ESRI warns Ireland heading for recession this year as Covid-19 hits economy
10 Usit travel group in liquidation due to coronavirus crisis
Real news has value SUBSCRIBE
Save money on international transfers