Who’s still earning less than they did in 2009? 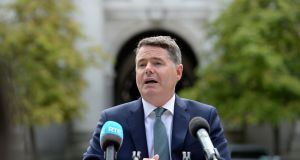 The Minister for Finance Paschal Donohoe: has signalled no negative impact on personal taxation, even in the event of a no-deal Brexit. Photograph: Alan Betson / The Irish Times

We’ve seen many changes to our personal tax burden over the past 10 years, tracing the shape of the economy; from a relatively lighter load back in 2009, through the austerity years, and back to growth once more.

However, for many of us, despite decreases in personal income tax in recent years, the truth is that we continue to give up more of our income today than we did back in 2009. Not only that, but against a background of rising wages, the “stealth” effect of the tax system failing to move in line with inflation, means that we may be giving up even more than we realise on an inflation-adjusted basis.

As Deborah Casey, a senior manager with PwC notes: “For those paying tax, the value of any pay rise is diminished when tax rates and tax credits remain unchanged.”

But can we expect any improvement next Tuesday?

“The Minister has already signalled no negative impact on personal taxation, even in the event of a no-deal Brexit. At the same time, as the Brexit outcome is unlikely to be clear by October 8th, windfalls are very unlikely and prudence will be the order of the day,” Ms Casey notes.

So who have been the winners – and the losers – in our personal tax system over the past 10 years? Figures prepared by PwC, as we can see below, show that only two of our budget families are actually taking home more now – all other things, including income, being equal – than they were back in 2009.

Our single parent Amie, on income of €30,000, now gets to keep more of her take-home income than she did back in 2009. And the order of that increase is paltry, at just €2 a month.

Our other “winners” are single income family Ellen and Joan, on an income of €57,500. And the only reason they have beat the tax system, in a sense, is because they get to keep €10,000 out of the tax net every year by availing of rent-a-room relief.

The six other families are taking home less today than they did back in 2009. But some are faring worse than others.

Worst of the bunch, however, is our low income worker, earning €22,000. She has seen her effective tax rate soar by 42 per cent since 2009, bringing her already low income down by €77 a month.

Leslie and Kitty are married pensioners on an income of €48,000. Back in 2009, this meant they lost only 3.7 per cent of their income each month to tax, and could keep the rest, some €3,853. However, the age of austerity soon saw this effective rate rise sharply: by 2014, their tax bill had doubled to 7.5 per cent of their income, leaving them with just €3,698 a month.

Changes since then means that their situation has improved; but their effective tax rate this year is still considerably higher than 2009, at 5.9 per cent. So their net income, of €3,765.35 a month, is still some €87 less than it was in 2009.

Mary is dealing with an annual income of €18,000. Back in 2009, this kept her out of the tax net completely, and she had a monthly income of €1,500. This ended in 2011, when she felt the brunt of the introduction of the universal social charge (USC), as it meant her net income fell by almost 3 per cent.

Since 2014 this has been falling, as the Government adjusted the level at which people start paying the USC, as well as the applicable rate to those on lower incomes. This means that she is now only losing 1 per cent of her gross income on tax. But that still means that her net income is less than it was back in 2009, at €1,485.02 a month.

Her tax charge has fallen since it peaked at almost 13 per cent in 2013/14, when she was left with less than €1,600 a month, but it remains considerably higher than those halcyon days of 2009.

Her effective tax rate is now 10.4 per cent – compared with 6 per cent back in 2009, leaving her out of pocket by about €77 each month. Not only that, she now has to contend with record rents.

Yes, our higher earners Frank and Alison are faring better than they were back at the height of austerity when they lost 43 per cent of their gross income to the tax man. But while, like others, they have benefited from a falling tax burden as the financial crisis faded – down from an effective tax rate of 43.3 per cent in 2013/14, to 41.2 per cent in 2019 – it is still 3 percentage points higher than back in 2009. As a result, their income is still €230 a month lower than it was back then.

Added to this is the introduction of property tax in 2013. As they own a house worth €1.5 million in Dún Laoghaire, they have been paying tax of €2,592 on this. However, the value of their house has since risen substantially, and they now fear the potential impact of the latest mooted re-valuation in 2020.

With an income on the precipice of the higher rate tax band (€35,300), our public sector worker Tom has had some mixed fortunes over the past decade.

However, he is still down by about €26 each month; and, as a smoker, he has seen the cost of maintaining his habit rise substantially over the past decade.

If you want to keep more of your income, you need to do more than just rely on the vagaries of income tax bands and rates. Single income family Ellen and Joan have discovered that one of the few remaining options for doing this is by letting out a room in your home.

Thanks to the rent-a-room scheme, which allows people to earn up to €14,000 a year tax-free by letting out a room (or rooms) in their home, this couple have managed to boost their income by €10,000 a year.

However, the introduction of property tax has somewhat mitigated these gains, as they pay tax of €585 a year on their four-bed semi in Kilkenny.

A single parent in her late thirties, Amie was recently looking back over her payslips and notes that she is still not much better off than she was back in 2009.

As a self-employed couple, Mark and Linda have benefited from the introduction back in 2016 of the earned income credit, which they can use to reduce the amount of tax they owe. Available at a rate of €1,350 for 2019, it has been one of the advantages for them of the past few years.

However, that isn’t enough to reverse the impact of the years of austerity and their effective tax rate is now higher than it was back in 2009, albeit just by about 2 per cent. It does mean, however, that this family are still down by about €108 a month on 2009.

1 Aldi empire wracked by family feud
2 Cliff Taylor: What permanently low interest rates mean for you as a saver or borrower
3 TikTok to be banned from US app stores from Sunday
4 Will PTSB be Ulster Bank’s knight in shining armour?
5 NatWest considers closing Ulster Bank in the Republic
6 Ulster Bank CEO tells staff ‘all options’ on future on the table
7 ‘INM 19’ members win High Court applications for document access
8 How Ireland managed to green the White House
9 Fusion shares soar on news of antigens for Covid-19 tests
10 Volkswagen close to selling its Bugatti supercar brand
Real news has value SUBSCRIBE
Save money on international transfers