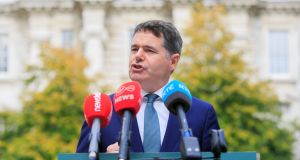 Minister for Finance Paschal Donohoe will tell the Oireachtas Budgetary Oversight Committee it is “critical that the expenditure position for Budget 2020 is managed within the parameters set out in the mid-year expenditure report”. Photograph: Gareth Chaney/Collins

Government departments have been warned there will be no extra money available in the budget over and above what has already been pledged.

The Irish Fiscal Advisory Council has repeatedly criticised the recent pattern of the Government increasing spending despite budgetary restrictions.

This has been mostly done to plug overruns in the Department of Health but officials have been warned that this is “not possible” for the forthcoming budget, due to be delivered on October 8th.

Robert Watt, the secretary general of the Department of Public Expenditure and Reform, has issued other secretaries general with the firm directive as preparations for the budget intensify. A key element of the approach, he says, is the management of 2019 spending and negotiations for the 2020 budget following spending limits already set out.

His warnings will also be echoed by Minister for Finance Paschal Donohoe at the Oireachtas Budgetary Oversight Committee today.

Mr Watt’s letter said “it is not possible or appropriate to implement a budgetary package in excess” of that set out already in the mid-year expenditure report and the summer economic statement.

They allow for a budget-day package of €2.8 billion, of which €2.1 billion has already been committed. These figures were reconfirmed by Mr Donohoe last week when he chose to prepare the budget for a no-deal Brexit.

The comments from Mr Donohoe and Mr Watt will be seen as a warning to Minister for Health Simon Harris, in particular.

Mr Donohoe’s opening statement to the Oireachtas budgetary committee says it is “critical that the expenditure position for Budget 2020 is managed within the parameters set out in the mid-year expenditure report”.

Departments will be required to “re-prioritise spending” to deal with pressure for extra money and new policy initiatives, Mr Donohoe said. Health spending must be “proactively managed” to reduce the risk to the “risk to the public finances” of another spending overrun, he adds.

Mr Watt also said “significant overruns” in what was budgeted for 2019 “would necessarily reduce the scope” for Budget 2020. “Where departments have pressures for additional expenditure, they must look to offset these pressures through re-prioritisation.

Both Mr Watt and Mr Donohoe say that spending for this year is managed within the allocations agreed by the Government and the Dáil.

If the UK leaves the European Union in an orderly fashion, the Government will run a small surplus of 0.4 per cent but this will swing to a deficit in the range of 0.5 to 1.5 per cent if there is no deal. Sectors of the economy seen as at risk from a no-deal Brexit at the end of October will be supported through greater Government borrowing.

Mr Donohoe has said the €2.8 billion spend could increase if he decides to borrow more and sources said the €700 million available for new spending will be allocated on budget day.

The vast majority of no-deal supports will then be funded through borrowing, it is understood, with Mr Donohoe providing a rough outline of such plans on budget day, rather than spending specifics.

Mr Donohoe says “the scope for budgetary measures, outside the Brexit support package, is extremely constrained”.

Mr Harris has already said there will be a supplementary estimate in the health sector, but said it will not be as high as 2018, when an additional €700 million had to be allocated. This was mostly funded through higher-than-expected corporation tax receipts.

1 Helen McEntee holds up well for someone with barely a leg to stand on
2 Covid-19: Government set to reject advice and approve reopening of gastropubs and restaurants
3 Restaurants and gastropubs to reopen in December under Government plan
4 In Brexit end game, Johnson scours menu of unpalatable choices
5 Trump signals White House exit if Biden wins electoral college vote
Real news has value SUBSCRIBE