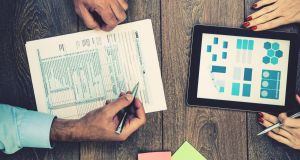 The paper filing deadline for your tax return is October 31st, while if you file online, you’ll get until November 12th to pay and file. Photograph: iStock

With just 38 days until the 2018 tax return deadline (or 50 days if you’re filing online), it’s time to rustle up those receipts and either get your accountant, or yourself, on the case.

The paper filing deadline is October 31st, while if you file online, you’ll get until November 12th to pay and file, so there isn’t too much time to get organised.

1 Who needs to file

First questions first: who needs to file a Form 11? Previously, you would be obliged to file such a form if you had non-PAYE income of €3,174 or more in a year. Now, for people earning between that figure and €5,000 outside the PAYE system, Revenue wants you to file a simpler and shorter Form 12. Once you go over this limit, however, you become what’s known as a “chargeable person” and will be required to file a Form 11.

And if you earn less than that, don’t think you won’t owe any tax; you can file the aforementioned Form 12 to declare this income.

If you’re a user of ROS, it’s time to log on and make sure your certificate and software – particularly if you’ve bought a new computer over the past year – is up to date and ready to go.

3 Revenue is looking for more information

While the Revenue always asked questions on domicile and tax residency, it was possible to fill out the form without answering all of these. Now, according to Michael Scanlan, training and technical manager with Tax Assist Accountants, filers will be forced to complete this section or they won’t be able to file their return, and it “might catch people out”.

Typically, the vast majority of respondents will answer “yes” to all three but, as Scanlan notes, if you’re not sure how to answer these questions, get advice.

“It could have a hugely negative impact for people, as they could be over taxed” if they provide incorrect information, he says.

Farmers are also being requested to provide further information, including data on stock relief claimed under section 667B.

4 But it is also giving you more

Over the past few years, Revenue has made considerable progress in pre-populating your Form 11, with the aim of assisting “taxpayers to meet their filing obligations”.

“This makes it easier for taxpayers to complete tax returns, minimises the scope for errors and omissions, reduces the need to contact us directly and speeds up the process of filing a tax return,” Revenue says.

For example, if you use the ROS service, you will find a lot of information already there when you log in. Some, such as information on any PAYE income, will be up to do date, but typically the Revenue will carry forward any information on self-employed income, etc, from last year. This means that you will need to amend it yourself.

Presumably, however, this process makes it much easier for the tax authority to assess any significant differences from year to year, and could be used to determine which filers might be subject to an audit.

Revenue has always been the recipient of information from other state agencies, but it has really upped its game this year, particularly when it comes to landlords.

For the first time, for instance, the Revenue has sought to indicate on the Form 11 whether or not a landlord has registered a property they let out with the Residential Tenancies Board (RTB). This is a crucial point as a landlord is only eligible for a deduction on their mortgage interest bill if they have registered with the RTB. The Revenue is trying to weed out those who are fraudulently claiming the deduction.

For 2018, landlords whose property is properly registered can offset 85 per cent of their interest bill, a figure that will rise to 100 per cent for 2019.

In addition, if you’re a landlord who has let out properties via HAP (housing assistance payment), there will be no room to hide earnings as Revenue has prepopulated this year’s tax forms with data on rents shared with it by local authorities.

If your payment is late, a “late-filing” surcharge will apply. If you file and pay by December 31st, you will face an initial late filing surcharge of 5 per cent of your tax liability for 2018. If you don’t get it in by that date, the penalty will jump to 10 per cent of the tax you owe.

If your local property tax filings are not in order, you will also face a late filing surcharge even if all your Form 11 filings are on time.

“Bear in mind that Revenue can also apply further interest charges, meaning your original tax bill can potentially be greatly increased,” he says, adding that a further impact of filing late is that it can also increase your chances of being selected for the dreaded Revenue audit.

“In 2018 Revenue conducted almost 4,750 audits which resulted in just over €255 million being recouped,” he notes.

A Revenue clampdown on so-called “flat rate expenses” caused much confusion and outrage last year. These allow a host of workers to claim an automatic deduction on their tax bill, due to the cost they incur in providing extra equipment at work. Carpenters, teachers, doctors, violinists are just some of those who benefit. Last year, Revenue made moves to remove the deduction from agricultural advisers, journalists, actors and shop assistants.

One tax credit that Scanlan finds people often don’t claim is the Home Carer credit, which was worth €1,200 in 2018

It has since confirmed that these expenses will now remain in place until 2020. So, if you are entitled to such an expense, (check here: https://iti.ms/2On8DW2) and haven’t claimed this in previous years, make sure you do so now, as you will benefit from the deduction for the previous four years.

An annual expense rate of €400, for a higher rate taxpayer will reduce their tax bill by €160 a year. And claiming for the previous four years could result in a cheque in the post for some €640.

One tax credit that Scanlan finds people often don’t claim is the Home Carer credit, which was worth €1,200 in 2018 (and will be €1,500 in 2019), which would reduce your tax bill by a straight €1,200 for 2018. To be eligible, the home carer must not earn more than €10,200 a year, while the other partner may be better off benefiting from the higher cut-off point for the standard rate of tax, depending on their earnings.

It eligible however, and if it hasn’t been claimed in the last four years, it could offer the chance of a windfall. “You could be close to €4,000 in a refund coming up to Christmas if you were entitled to claim and haven’t claimed,” advises Scanlan.

7 You will pay less tax – possibly

Yes, this is the good news part of the process. If your income for 2018 is the same as it was for 2017, budgetary changes made that year mean you should have a smaller (albeit only marginally) tax bill for 2018.

It also increased the earned income credit. Introduced back in 2016 at a rate of €550, this was brought in with the aim of levelling the playing field between those who pay taxes in the PAYE system and benefit from the €1,650 PAYE tax credit, and those who are self-employed and don’t receive any benefit. In 2018, it was increased from €950 to €1,150, which means that your tax bill should fall by €200 for 2018 if you’re claiming this.

The rules haven’t changed in terms of preliminary tax; but the Revenue’s attitude to chasing underpayment most definitely has

Scanlan estimates that if you’re paying tax at the higher rate, all other things being equal, your tax bill will be about €400-€500 less this year.

However, with wage growth up across the board, you might find that your earnings for 2018 were also up; this could mean a shortfall in how much preliminary tax you owe.

And the self-employed still face one higher burden than those in PAYE; the 3 per cent USC surcharge for those with income over €100,000.

But filers need to make sure they’re selecting the right option.

“The rules haven’t changed in terms of preliminary tax; but the Revenue’s attitude to chasing underpayment most definitely has,” says Scanlan, noting that Tax Assist offices have seen a greater propensity this year from the Revenue to send out letters penalising taxpayers who haven’t met the requirements. And penalties will cost you about 0.0219 per cent a day in interest.

The safest option, says Scanlan, is to go with 100 per cent of this year’s bill; but a lower amount might be necessary depending on financial circumstances.

If you do find yourself in difficulty, banks such as AIB now offer products, such as Prompt Pay, to help you spread the cost of payments such as your annual tax bill, over a longer period of time. With Prompt Pay, for example, you can borrow upwards of €5,000 and repay over 11 months.

1 Will your boss let you work long-term from home – or from abroad?
2 Plans for €2bn Dart expansion lure Bombardier to Dublin
3 Only half the homes needed this year will be built, construction event told
4 AA Ireland bought by Olivier Sarkozy-led fund for more than €240m
5 Revolut shifts regulation of Irish customers to Lithuania
6 McGuinness faces Brexit and Covid grilling at parliamentary hearing
7 Subway bread too sweet for the Irish tax authorities
8 Press Up’s asset diversity is its Achilles’ heel
9 Not just another brick in the wall
10 Google tells workers to return to country where they are employed
Real news has value SUBSCRIBE
Save money on international transfers