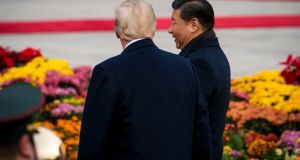 Donald Trump is increasingly betting that stock market strength is the key to him being re-elected next year, according to Bloomberg and CNBC reports last week citing White House sources. Trump is closely following markets and has apparently linked recent gains to progress on trade talks with China, buttressing his enthusiasm for cutting a deal. Whether markets would actually rally on a trade deal is hard to say – strategists are divided as to how much is already priced in – although Trump is certainly right in assuming markets would recoil if negotiations foundered. However, Trump is making a big mistake if he thinks he can guarantee compliant market behaviour in 2020. Ending trade tensions would boost global growth but that could prompt the Federal Reserve to resume its rate-hiking plans. Of course, the Fed might not turn hawkish, and markets would surely breathe a sigh of relief were that to happen, but that can bring its own problems. Valuations look elevated relative to history; things could get bubbly if market exuberance takes hold, increasing the risk of another boom-bust cycle. Much as Trump might like to control financial markets, it’s not that simple. Too much of a good thing can be harmful.

The US economic expansion will become the longest in history in July, surpassing the 120-month expansion that ended with the bursting of the dotcom bubble in the early 2000s. Nevertheless, age can be misleading, according to LPL Financial Research. This has been a long but weak recovery, with real GDP growth averaging 2.3 per cent in the current cycle, “the slowest pace of growth among all expansions since 1970 and a key contributor to this cycle’s near-record age”, notes LPL. Other metrics such as growth in industrial production, personal consumption and nominal GDP confirm the recovery has been muted compared to past expansions, indicating the kind of excess seen near prior peaks remains absent. When will the next US recession begin? The latest National Association for Business Economics survey shows roughly half of economists expect a recession by the end of 2020 and three-quarters expect one by the end of 2021. However, economists don’t have a great track record here, often predicting the next recession is two years or so away from the date the question is asked. Many factors might scupper Trump’s aforementioned desire to keep the bull market and the US economic expansion going beyond next year’s elections – the Fed, an oil price shock, trade tensions, Trump’s own impulsivity – but old age is unlikely to be one of them.

Could this be a bear market rally?

Stocks retreated last week after a two-month rally where they had barely paused for breath. Right now, the consensus is this is a dip in a bull market, but what if that’s not the case? What if the last two months were no more than a bear market rally? By December, stocks had fallen 20 per cent, which is commonly viewed as bear market territory. Since then, stocks gained almost 20 per cent but that’s not proof the bears have disappeared. During the last two bear markets (2007-09 and 2000-02), stocks enjoyed rallies of 24 and 21 per cent respectively, veteran market commentator Mark Hulbert noted last week, only to soon succumb to lower prices. Indeed, stocks almost regained their all-time highs within months of the bursting of the dotcom bubble in March 2000, before going on to halve in value. Is this time different? Probably – the rally has been technically impressive and the fundamental backdrop has improved. Nevertheless, there’s no way of knowing for sure just yet, cautions Hulbert, not until stocks either surpass last year’s bull market high or fall below Christmas Eve’s lows.

The worst era in history for investors

For all the talk of decade-long bull markets, very long-term investors are likely living through the worst investment period in history. So says Ritholtz Wealth Management’s Ben Carlson, who notes that despite the long bull market, returns have actually been mediocre over the past 19 years, courtesy of sky-high valuations at the end of the late 1990s technology bubble.

For investors with a 35-year horizon, the worst entry point in history would have been the infamous market peak of September 1929. Nevertheless, stocks eventually recovered after the depression-era crash, averaging returns of 8.1 per cent over the next 35 years.

For stocks to match that return over the 35-year period between 2000 and 2034, the S&P 500 would have to average annualised gains of 12 per cent over the next 16 years – a very tall task, given how well things have gone over the past decade. We would, says Carlson, “basically need a repeat of the 1990s to get there”. Outside of the US, of course, things have been even worse, with many European indices still below 2000’s all-time highs. Buying high can be a costly affair, as the last 19 years have shown.