From bear to boom: 10 years on from the market crash 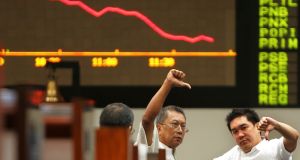 ‘When times get tough, investors often decide to sit things out until the coast is clear. The problem is that by the time the smoke has lifted, the train has often left the station, to use an old market adage.’ Photograph: Pat Roque/AP

A decade ago, the global financial crisis was raging and stocks were sinking amid the worst bear market since the 1930s. Ten years ago this week, stocks finally bottomed, setting in motion a bull market that continues to this day. What can investors learn from that bear market and the long rally that followed?

Fear is stronger than greed

By the time markets bottomed on March 9th, stocks were dirt cheap. The S&P 500 had more than halved over 18 months. Adjusted for inflation, the index was 61 per cent lower than at its peak in March 2000, nine years earlier. Warren Buffett’s favourite valuation indicator showed equities were valued at less than 60 per cent of US GDP, compared to 153 per cent in 2000.

Adjusted for inflation, the Dow Jones Industrial Average was trading at the same level as it had been in 1966, US government economic adviser Larry Summers said at the time, making it the “sale of the century”. Eminent investor and former Fidelity fund manager Peter Lynch agreed. “We’ve had 11 recessions since World War II and we’ve had a perfect score – 11 recoveries,” he said, adding that bargain stock prices made him feel like “a mosquito in a nude colony”.

That sentiment was later echoed by renowned contrarian investor Howard Marks. The economic outlook was bad but “most people exaggerated that into a belief that the world was ending”. Asset prices were “ridiculously low . . . the key to making money was to have money to spend and the nerve to spend it”.

However, investors’ fear of further losses was greater than their greed for gains. At the bottom, a record 70 per cent of investors polled by the American Association of Individual Investors described themselves as bearish. Merrill Lynch’s monthly fund manager survey showed a record number saw stocks as undervalued but they nevertheless preferred to stockpile cash and be underweight equities. Legendary bond manager Bill Gross went further, saying he had sold off every single stock in his retirement portfolio.

Two factors blinded investors to a generational buying opportunity. Firstly, there was the fear things would just keep getting worse. It was no coincidence that the Financial Times’ Future of Capitalism series was launched on the very day that stocks bottomed.

“The fear was not simply a recession but of a global depression and meltdown of the financial system”, as Blackrock’s Russ Koesterich later noted. Second, investors were sick of hearing about cheap stocks. Warren Buffett famously called on investors to buy stocks in the aftermath of Lehman Brothers’ collapse in October 2008, but indices went on to lose almost a third of their value.

Bargains were everywhere “but they keep going down”, said Peter Lynch at the time, admitting he had “definitely been pounded”.

Investor sentiment was encapsulated by Los Angeles Times columnist Joe Queenan in the week markets bottomed. Unimpressed by analyst talk of cheap stocks, he complained that “the best buying opportunity in years is now 14 months old”. There is, he added, “a time for hysteria, and a time when cooler heads should prevail. This is the time for hysteria”.

It’s easy to miss the rally

When times get tough, investors often decide to sit things out until the coast is clear. The problem is that by the time the smoke has lifted, the train has often left the station, to use an old market adage.

Days before the bottom, bear-turned-bull Jeremy Grantham warned that investors with a lot of cash “typically” miss “a very large chunk of the market recovery”. Stocks more than doubled in the second half of 1933, noted Grantham, “long before all the banks had failed or unemployment had peaked”. Similarly, Grantham pointed out that UK stocks rallied 148 per cent in five months after stocks bottomed during the 1974 bear market.

Indeed, a similar trend has been evident lately, with the S&P 500 gaining almost 20 per cent in less than two months following the market panic that climaxed on Christmas Eve.

It’s hard to be right and sit tight

Being “right” and catching the bottom can be overrated. Hedge fund manager Douglas Kass was bearish during the global financial crisis and turned bullish at just the right time, saying in March 2009 that stocks had set a “generational low”. By the end of the same month, however, Kass had turned “more cautious”; by August, he was a fully-fledged bear once again.

Grantham was bearish throughout the financial crisis before famously advising investors to start buying within days of the bottom. Unlike Kass, Grantham is a long-term investor who thinks in years rather than months, but he too turned cautious too early. As early as 2011, he was warning that stocks were overvalued by 40 per cent; by 2013, they were apparently overvalued by 75 per cent.

Investors have faced a pressure to sell throughout this long bull market. Just look at the headlines from mainstream financial outlets: “Is this the biggest bear market rally of all time?” (CNBC, August 2009); “US stocks surge back towards bubble territory” (Business Insider, 2010); “Is this a bear market rally?” (Seeking Alpha, 2011); “Is the bull market long in the tooth?” (Barron’s, 2012); “Nobel prize winner warns of US stock market bubble” (CNBC, 2013); “4 potential killers lurk as bull market hits 5” (CNBC, 2014); “Stocks are frighteningly expensive!” (Business Insider, 2015); “A stock-market crash of 50%+ would not be a surprise – or the worst-case scenario” (Business Insider 2016).

Iconic 1920s financial trader Jesse Livermore once said it is “no trick at all to be right on the market”. You’ll always find lots of early bulls in bull markets and early bears in bear markets, said Livermore. The trick is to “sit tight” but “men who can both be right and sit tight are uncommon” – words that ring equally true today.

Bull markets can be unnerving affairs

Including dividends, the S&P 500 has gained more than 350 per cent over the last 10 years but investors have been tested on multiple occasions. Many thought the bear was back after stocks swooned 16 per cent in the summer of 2010. Even more thought so in mid-2011, when the S&P 500 fell 19.4 per cent (just shy of official bear market territory) as European sovereign debt fears rocked markets. The average stock lost a third of its value during the 2015-16 correction, with indices going nowhere over an 18-month period.

Investors are still shaken by the market plunge at the end of 2018, when the S&P 500 lost a fifth of its value. There have been no fewer than six double-digit percentage corrections (eight, if you include declines of 9.8 and 9.9 per cent in 2011 and 2012) since the bull market began 10 years ago.

The point: bear markets are famously unnerving but bull markets can also be testing affairs.