Past performance no guide to future for chief executives 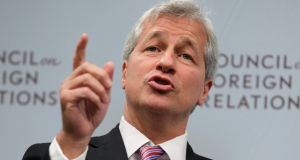 JPMorgan’s Jamie Dimon was ranked the best chief executive in the world in 2018 by CEO World magazine. Photograph: Yuri Gripas/Reuters

Chief executives get paid a lot of money, something usually justified by the argument that a strong leader can transform a company’s fortunes – think Steve Jobs, who took Apple from near bankruptcy to the most valuable company in the world, or JPMorgan’s Jamie Dimon, ranked the best chief executive in the world in 2018 by CEOWorld magazine.

The romantic view of leadership, the idea the leader is the main driver of a company’s fortunes, has dominated in recent decades, most notably in the United States, where the average chief executive-to-worker pay ratio soared from 20:1 in 1965 to more than 300:1 at the turn of the century.

Company boards have embraced the message of Harvard economist Michael Jensen, who argued in an influential 1990 paper that chief executives needed to be paid like “value-maximising entrepreneurs” rather than “bureaucrats”. Doing so, said Jensen, would help companies attract “the best and brightest individuals to careers in corporate management”.

Over the years, many have taken issue with Jensen’s core arguments regarding chief executive pay. Now, new research by hedge fund manager and Verdad Capital founder Dan Rasmussen investigates a different, but related issue – just how important is it for investors to seek out skilled chief executives and well-managed companies?

Secondly, there is a consensus that investors should look for well-managed companies headed by top chief executives. “Proven track record” is an “obvious” criterion for selecting chief executives, according to a Harvard Business Review article discussing the “art and science of finding the right CEO”, with past performance deemed to be the “best indicator” of a chief executive’s future potential.

If a chief executive does well over a three-year period, does that predict their performance over the next three years? And are some chief executives better than others at driving share price returns?

Regarding the first question and the importance of attracting the “best and brightest”, Rasmussen’s database of 8,500 chief executives revealed that having a chief executive with an MBA made no difference to share price returns.

He also examined portfolios of companies headed by bankers and elite consultants, but the results were the same; an “elite pedigree – the type favoured by headhunters and corporate boards – is not predictive of superior management”, with “highly-credentialed” chief executives adding “no measurable value to shareholders”.

Incidentally, those with MBAs had a much better chance of becoming chief executive. “Elite credentials thus benefit the individual,” concluded Rasmussen, “but there is little evidence that these credentials benefit shareholders.”

As for the more important question, that of a chief executive’s track record, the data showed there is “little to no persistence in CEO performance from one company to the next” and “no discernible relationship for CEOs in general”.

The investment community and the financial media might well lionise a chief executive, who has enjoyed great success in the past, but that tells you nothing about their future performance, at least as measured by share price returns. Focusing on the “great man” theory of corporate management is a bad idea, it seems, and favouring stocks with strong past-performing chief executives is “like betting on heads because the last two coin flips came up that way”.

Company boards, however, don’t appear to think this way, attributing far too much importance to the role of the chief executive. The good news for chief executives is that this results in them collecting outsized pay packages; the bad news is it means they are much more likely to be sacked for problems caused by factors beyond their control.

An earlier study of 3,365 chief executive turnovers found a significant decline in the performance of the broader industry doubled the chances of a chief executive being fired.

Separate research shows that luck is often mistaken for chief executive skill. A well-known 2001 paper, for example, found that oil executives tended to get pay hikes when oil prices rose while chief executives at multinationals saw their pay rise when companies benefited financially from random currency movements. More recent research suggests nothing has changed in this regard. One 2016 paper estimated about 90 per cent of pay-for-performance compensation is actually “pay for luck”, while another paper recently found executive pay packages at oil and gas companies is “still closely tied to oil prices”.

Of course, none of this means that the chief executive is irrelevant. Some executives have far-reaching effects – sometimes good, sometimes bad – on the companies they lead. Still, while “tales of corporate ‘great men’ are seductive”, the figures suggest stock-pickers may be “making a mistake in spending so much time on management quality”, says Rasmussen, with journalists, investors and company boards “placing excessive emphasis on chief executive pedigrees and track records”.

Warren Buffett once quipped that when a management with a brilliant reputation tackles a business with a bad reputation, it is the reputation of the business that remains intact. By the same token, if you are invested in a company with a “really good business”, one with inherent structural advantages, then “your idiot nephew” could run it.

The latter statement may be an exaggeration, but Buffett’s dismissal of the romantic view of leadership is borne out by the data. Investors are often told that past performance is no guide to future stock returns – it seems the same can be said of chief executives.

1 Fianna Fáil may have just pressed the pause button on the property market
2 UK to prioritise EU trade deal over one with United States
3 Who are Ireland’s 17 billionaires?
4 State ranked highly for attracting skilled workers but low on gender issues
5 My father in a nursing home wants to gift me his house
6 Are there annual limits on inheritances or gifts to a child?
7 London fintech company Nuroco to expand here
8 CVC must reveal Six Nations interest before Pro14 bid
9 Eason puts Blanchardstown store on market at €16m
10 Belfast regeneration project worth £500m gets green light
Real news has value SUBSCRIBE
Save money on international transfers