Stocktake: Bored and broke? Trading is not the answer 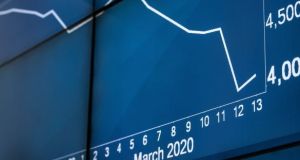 Many people are at home right now, either because they’re working remotely or they’ve lost their jobs. Life has become boring and many people are in need of extra cash.

Little wonder, then, that many people are turning to stock market trading. You’ve got to join a waiting list to open an account with discount brokerage Degiro, popular among retail investors in Ireland. In the US, where commission-free trading is now normal, TD Ameritrade has said retail clients opened a record 608,000 new funded accounts in the first quarter, with the vast majority opened in March.

Daily client trades exceeded 2.1 million in the first quarter – more than twice as many as the previous record set in the last quarter of 2019.

Interactive Brokers gained the same number of new customers in the first quarter as it did in the first three quarters of 2019, combined. ETrade and Charles Schwab have also seen record numbers of new accounts while Robinhood – the pioneer of commission-free trading that is especially popular among young, inexperienced investors – has reported a quadrupling in trading volumes.

Markets are volatile right now. Some novice investors will get lucky and make a quick buck, but the academic research confirms many more will lose money. This won’t end well.

1 In this strangest of recessions, what happens next for Ireland?
2 Bank of Ireland sees about 2,000 staff apply for voluntary redundancy
3 Best Covid-19 ‘influencers’ will avoid hectoring
4 Michael O’Leary is the boss you want to lead an airline out of crisis
5 Should I switch bank now with Ulster Bank at risk of closing?
6 Estée Lauder staff at Dublin airport plan further strike action
7 Ireland’s Covid-19 economy in five graphs
8 EY Entrepreneur of the Year: nominee profiles
9 Dunnes Stores set to enter grocery delivery market
10 Overhaul of lease arbitration regime would be a game changer for retailers
Real news has value SUBSCRIBE
Save money on international transfers