Stocktake: Stock market gains no cause for outrage 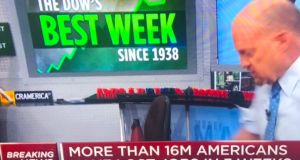 Democratic strategist Justin Horwitz’s comment – “Everything that is wrong with America, in one image” – went viral, but the howls of outrage were misplaced.

Some people have been getting all worked up over a recent screenshot of CNBC host Jim Cramer featuring two contrasting headlines; “The Dow’s best week since 1938” and “More than 16m Americans have lost jobs in 3 weeks”.

Democratic strategist Justin Horwitz’s comment – “Everything that is wrong with America, in one image” – went viral, but the howls of outrage were misplaced. As Ritholtz Wealth Management’s Ben Carlson pointed out, you don’t understand how the stock market works if you’re upset that it “isn’t getting killed every day even as the news gets worse”. Stock markets are volatile and forward-looking. An awful lot of bad news about the coronavirus was priced into stocks following the fastest bear market in history, eventually setting the stage for a similarly rapid rebound.

To borrow a simple point made by former hedge fund manager and author Victor Niederhoffer, stocks tend to go down after periods of excessive optimism and they tend to go up after there has been excessive pessimism. That’s why stocks often rise when the headlines are negative and fall when the headlines are positive. The stock market moves around a lot, says Carlson, and “sometimes doesn’t match the sentiment of the world at large”. If you get morally indignant about this, then you’re missing the point.

1 In this strangest of recessions, what happens next for Ireland?
2 Michael O’Leary is the boss you want to lead an airline out of crisis
3 Bank of Ireland sees about 2,000 staff apply for voluntary redundancy
4 Best Covid-19 ‘influencers’ will avoid hectoring
5 Estée Lauder staff at Dublin airport plan further strike action
6 Ireland’s Covid-19 economy in five graphs
7 Dunnes Stores set to enter grocery delivery market
8 Ireland is in danger of losing the woods for the trees on emissions reduction
9 Should I switch bank now with Ulster Bank at risk of closing?
10 Fortnite owner signs multimillion deal to buy Irish ‘kidtech’ firm
Real news has value SUBSCRIBE
Save money on international transfers