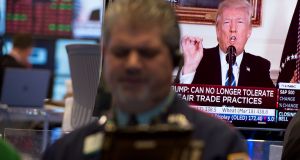 Traders on the floor of the Dow Industrial Average at the New York Stock Exchange in New York, as Donald Trump delivers a televised statement from the White House. Photograph: Bryan R Smith/AFP/Getty Images

Donald Trump just cannot stop tweeting about how he is making the stock market great again. Unfortunately, Trump’s understanding about how the market works isn’t what it might be. With that in mind, here are six stock market lessons – great lessons, the best lessons of all time – for the US president to consider.

The stock market doesn’t care about the president

In October, he said: “I’ve increased the value of your US assets by more than the $20 trillion that we currently owe.”

Treasury secretary Steve Mnuchin said earlier this year the stock market is a good report card for the administration, but Trump is going further, implying he is single-handedly responsible for market gains.

However, an increasingly strong global economy has resulted in almost every market on Earth enjoying strong gains this year. As Nobel economist and columnist Paul Krugman noted recently, if there is a “Trump bump”, then there is also a “Merkel bump, a Macron bump, a May bump, an Abe bump”. There has even been a “Tsipras bump”, adds money manager Barry Ritoltz, with the Greek market outperforming in 2017.

The S&P 500 has actually been a relative laggard in 2017. This, combined with the dollar’s decline, means the US market now accounts for 31.6 per cent of global stock market capitalisation – the lowest figure since November 2011, when markets were roiled by the prospect of a US debt default, and well below the 11-year high of 38.3 per cent set in December 2016, in the final month of Barack Obama’s presidency.

Additionally, Trump seems to have forgotten the current cyclical bull market began in March 2009. Stocks more than tripled during Obama’s eight years in office – and indices have been hitting all-time highs since 2013.

There’s nothing amazing about new highs

“Stock Market at an all-time high. That doesn’t just happen,” tweeted Trump in August. A stock market that is “higher than ever before”; “the highest point in the history of the stock market”; “the highest level that it has ever been” – his tone continues to be hyperbolic, as if he is awestruck by the scale of his stock market achievements.

The thing is, all-time highs are extremely common. The S&P 500 hit 127 all-time highs under Obama, 268 during Bill Clinton’s presidency and 154 under Ronald Reagan.

There’s a simple reason why new highs are a frequent occurrence. Stocks are regarded as a good long-term investment because they generally rise over time; thus, by definition, they will often be hitting all-time highs.

Since 1926, the S&P 500 has hit record highs in almost one-third of all months. Accordingly, it’s untrue to say an all-time stock market high “doesn’t just happen” – it happens all the time.

Trump constantly complains the media is ignoring the ongoing market gains. “I never see anything about the stock market sets new records every day,” he complained in February. “I never see it.” In July, he referred to a new high for the Dow Jones index, adding: “I wonder whether or not the Fake News Media will so report?” In August, he bragged about the Dow gains which the “mainstream media seldom mentions!”.

In reality, the mainstream media is covering the subject, as it has done since the S&P 500 broke out to all-time highs in 2013. If anything, it’s probably receiving increased coverage, given Trump’s politicisation of the stock market appears to have triggered increased interest among the general public.

According to Google Trends, the number of people doing an internet search for “stock market record” remained largely stable between 2013 and 2016 only to spike higher in the aftermath of Trump’s election victory in November 2016, and it has remained at elevated levels in 2017.

“We have a stock market that is so bloated,” he complained in June 2015, when the S&P 500 was about 20 per cent below current levels. Last year, he complained on numerous occasions that stocks were being kept at artificially high levels, most memorably in September 2016. “We are in a big, fat, ugly bubble,” he said. If interest rates rise “even a little bit”, stocks will “come crashing down”.

While Trump contradicts himself all the time, people do allow their political persuasions to influence their investment outlook. One US survey immediately after Trump’s election victory found the number of Republican voters expecting the economy to improve soared from 15 to 74 per cent; among Democrats, economic optimism more than halved.

Studies show investors become bullish when their preferred party wins, and bearish when it loses. Thus, Republicans feared investment Armageddon when Obama took office in January 2009, a time of dirt-cheap stocks that marked the biggest investment opportunity in a generation; Democrats tended to agree with Paul Krugman, whose immediate reaction to Trump’s election victory was to warn of a “global recession, with no end in sight”.

In reality, political developments generally have little lasting impact on stock markets. Stocks rise over the long term, irrespective of who is in power.

Market gains are not “unprecedented”

Stocks have certainly done well – the S&P 500’s 21 per cent gain over the last 12 months is more than double its historical norm. However, market returns tend to be lumpy: awful one year, great the next, the end result being one-year gains of 20 per cent or more are perfectly common.

How does Trump compare to other US presidents? His post-election stock market record is better than Obama’s but barely half that managed by Bill Clinton in 1996-97. Clinton’s predecessor, George HW Bush, also comfortably outperformed Trump, as did other presidents such as John F Kennedy, Franklin Roosevelt (twice) and Herbert Hoover. Overall, Trump ranks seventh since 1928, which hardly qualifies as “virtually unprecedented”.

Herbert Hoover, as noted above, initially presided over a strong market. Stocks gained 35 per cent in the first year of his presidency before crashing in 1929. Hoover’s inept response to the resulting economic depression meant he is remembered as one of the worst US presidents. Academics are also iffy about the reign of Calvin Coolidge, even though the biggest annualised stock market gains occurred during his administration.

In contrast, stocks performed relatively poorly under Theodore Roosevelt and Woodrow Wilson, both of whom are well-regarded by academic historians.

Trump might also like to consider the stock market performance of one Adolf Hitler. In his book Wealth, War and Wisdom, money manager Barton Biggs noted the German stock market was the best-performing market in the world between 1932 and 1938, and continued to make strong gains until late 1941.

Stock market performance, in short, may not be the best way of assessing whether an administration is successful or unsuccessful.

1 Sean Quinn stunned at rebranding of Quinn Industrial Holdings
2 Probate is changing: What does that mean for you?
3 Dublin Aerospace takes over Flybe’s aircraft servicing base at Exeter Airport
4 Will tracker mortgage be at risk if Ulster Bank closes?
5 Irish golf tourism faces ‘wipeout’ unless Covid travel restrictions eased
6 Irishwoman Adrienne Gormley joins N26 as chief operating officer
7 Makhlouf secures UK pension on top of €286,800 Central Bank role
8 Three Ireland switches on 5G network around the country
9 Growth in commercial property building costs falls due to Covid-19
10 HSE could save €200m a year by using more off patent drugs - report
Real news has value SUBSCRIBE
Save money on international transfers