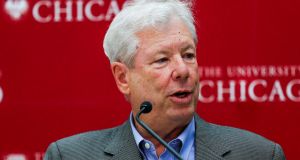 Investors can learn a lot from the work of Richard Thaler, the father of behavioural finance, who was last week awarded a Nobel Prize in economics for four decades of research into the quirks that govern people’s financial decision-making.

Don’t look at your portfolio

People have a strong aversion to losses; the pain of a euro lost is roughly twice as great as the joy of a euro gained. Thaler noted people who frequently check their portfolio balance were more likely to experience the pain of paper losses. Might this cause them to get spooked? Yes – people who saw their results eight times a year put only 41 per cent of their money into stocks; those who checked their results annually allocated 70 per cent towards stocks.

We’re lazy and we procrastinate. Accordingly, says Thaler, “if you want to get people to do something, make it easier”.

That’s the thinking behind his most famous policy nudge: automatically enrolling people into pension schemes. People can opt out, but the default option should be enrolment, coupled with auto-escalation – automatically raising contributions over time. Much more effective than tax subsidies, auto-enrolment resulted in UK pension participation rising from 42 to 73 per cent between 2012 and 2016. Auto-enrolment will be a reality in Ireland by 2021, Taoiseach Leo Varadkar said last month.

A couple have saved $15,000 towards their dream holiday home, which they hope to buy in five years. The money sits in a low-yielding bank account. They just bought a car for $11,000, having taken out a three-year car loan at 15 per cent.

To an economist, this is completely irrational. A dollar is a dollar: they should have used their savings to buy the car rather than getting a high-interest loan. Thaler noted that most people, however, consider it normal to categorise money into different mental accounts – that $15,000 was specifically earmarked for the home down-payment.

Similarly, a casino gambler who wins some money might “take the money he has won and put it in one pocket, and put the money he brought with him to gamble that evening (yet another mental account) into a different pocket”, writes Thaler (house money, as gamblers call it).

Mental accounting also affects investors: it contributed to the 1990s internet bubble, with investors taking on more risk as they felt they were “only playing with their gains from the past years”.

Thaler often relates how a wine-loving economist once bought fine Bordeaux wines at low prices. Over time, the price rose from $10 to $200. The economist wouldn’t buy an additional bottle at that price, but nor would he sell it for $200 – he was too attached to his purchase.

This inspired Thaler to investigate the endowment effect: people’s tendency to overvalue what they own. In one experiment, half the participants were given free coffee mugs, which they were then free to sell. The owners’ estimate of their worth was twice as high as non-owners.

The combination of the endowment effect and loss aversion, says Thaler, means investors “tend to hold on too long to stocks that have gone down, hoping they will rebound so they can sell without realising a loss”.

The opposite is true, replied Thaler. We learn how to do the “small stuff” – buying milk, lunch, clothes – through regular practice, but we don’t get many opportunities to learn when choosing a home, a mortgage, or a job.

“And when it comes to saving for retirement, barring reincarnation we do that exactly once.”

Binmore’s theories, he acidly concluded, were good for “buying milk”.

People may be occasionally dumb but that doesn’t mean markets are dumb, says efficient market theorist and fellow Nobel economist Eugene Fama, who argues smart investors keep market prices in line with reality. That’s not always true, says Thaler. In one paper, “Can the Stock Market Add and Subtract?”, he pointed to many cases where investor exuberance drove stocks to mathematically illogical levels.

More recently, he referred to the Cuba fund, a closed-end mutual fund made up of mainly US stocks. The fund’s holdings were largely unchanged after Barack Obama announced he intended to relax relations with Cuba in 2014, but the share price of the fund soared, trading at a 70 per cent premium to their underlying value.

Despite the presence of smart investors and short sellers, financial markets can go loco. Why then, asks Thaler, should we be confident about markets where there is less information and no arbitrage opportunities?

In 1965, US chief executives were paid 20 times as much as the average worker; by 2014, that ratio had swollen to more than 300. Some economists argue this reflects growing CEO productivity, but Thaler is sceptical.

Executive pay is determined by directors who rely on consultants who partly base their recommendations on the pay of other CEOs – an inefficient and “self-fulfilling” process, he argues.

“If stock prices can be off by a factor of two, why should we be confident that other markets do not diverge by that much, or more?”

It’s human to procrastinate. “If you build up a lot of cash and have to make a decision about what to do with it all at once,” Thaler once told author and Wall Street Journal columnist Jason Zweig, “that’s much scarier than moving the same amount of money in many smaller pieces.” Accordingly, set a ceiling for your cash: whenever it exceeds a designated percentage of your total assets, invest the excess into stocks or bonds.

Investors are no different. Thaler’s research shows the asset allocation chosen by investors depends on the funds offered in their retirement plan. In a plan offering one stock fund and one bond fund, the average allocation will be 50 per cent stocks. Add another stock fund to the mix and the average stock allocation would jump to two-thirds. An investor offered a choice of four stock funds and one bond fund will opt for a much greater equity mix than an investor shown four bond funds and one stock fund.

Needless to say, this is not a rational way to plan your retirement.

Learning about biases doesn’t cure them

Once a niche field, behavioural economics is decidedly mainstream these days. Bestselling books such as Thaler’s Nudge and Daniel Kahneman’s Thinking, Fast and Slow mean its lessons are increasingly well-known, but the field won’t disappear, says Thaler. Alas, you might be less overconfident and more willing to increase your retirement savings, “but reading a book isn’t going to give you great willpower all of a sudden”.

1 In this strangest of recessions, what happens next for Ireland?
2 Fortnite owner signs multimillion deal to buy Irish ‘kidtech’ firm
3 Former Parmalat officer gets 30-month sentence
4 MacBook Air: Great update, but fans may zoom in on one flaw
5 Will brother’s widow get half of our parents’ estate when they die?
6 NordicTrack S22i Studio Cycle: An expensive way to cut down on the cabin fever
7 Q&A: Where does KBC Ireland’s fine leave other tracker investigations?
8 Estée Lauder staff at Dublin airport plan further strike action
9 Air travel never going ‘back to way it was’
10 My aunt never told us that Gran passed away with no will
Real news has value SUBSCRIBE
Save money on international transfers